Inspired by DDD for Photojournalists? 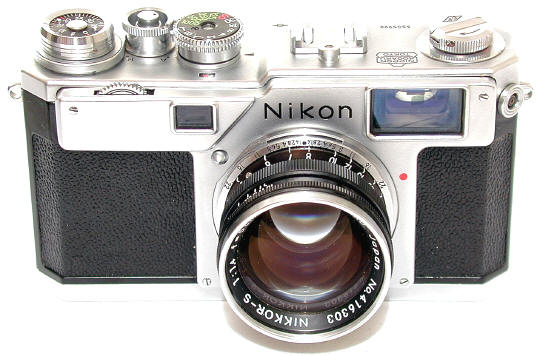 Many long time Nikon collectors have never seen an S4, much less owned it.  The S4 is one of the hardest to find Nikon Rangefinders in the US -- it was never officially exported out of Japan.  Being so hard to find, it is one of the "key" Nikon RF in terms of collectability.   It was introduced in March of 1959, just a few months before the incredibly successful Nikon F which would doom the Nikon Rangefinder system.   The S4 was never officially exported to Nikon's biggest marketplace - the USA.

The S4 amounts to the S3 with a few features removed.   Interesting, the S4 body casting and shutter mechanism are identical to the SP and S3.  If you had the know how and the right parts, you could actually sit down with an SP, a S3, and an S4, and turn all of them into a different model!   The fastest way to tell a S4 from an S3 is the lack of a self timer.  Why introduce a stripped down S3 at the end of the rangefinder era?    Its long been thought that the S4 was simply an attempt to produce a more basic camera for the budget conscious.   Perhaps, but they may be more to the story.     I recently received an email from an ex US serviceman in Japan who says the S4 was inspired by no less than DDD - David Douglas Duncan himself, essentially the "discoverer" of Nikon lenses himself!  Click HERE for the DDD Nikon S4 story. 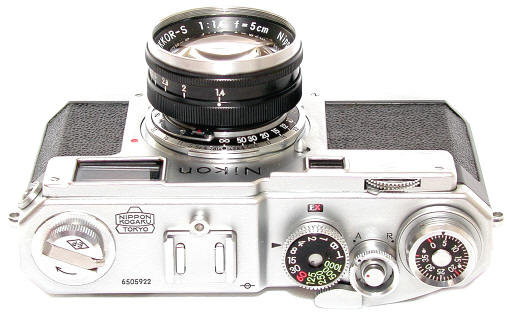 Specifically, the S4 has the same body casting and as the SP and S3, but without the S3's self timer,  35 mm frameline, without the motor lug for the motor drive (although the lug   could be added), and with a manually set film counter instead of an automatic  film exposure counter.   The S4 finder itself is the same as the S3, with the 50 and 105 framelines, but without the 35 frame on the outer edges.  Neither cameras had parallax correction for the framelines.    The S4 was produced only with cloth shutter curtains.   I have never seen titanium curtains in an S4, though SP Titanium curtains could be installed by a repairman.   The SP/S3 exposure meter will also fit the S4. 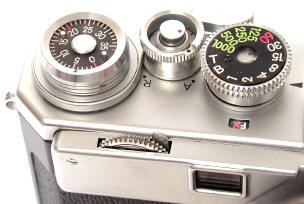 The film counter looks much like the one on the earlier S2 Black Dial.   The S4 is often considered  a "stripped down" S3 or SP.   Yet with its manually reset frame counter, absence of self timer, and 50 / 105 brightlines without  parallax corrected framelines, and improved shutter,   it's just as logical to think of the S4 as a improved S2! 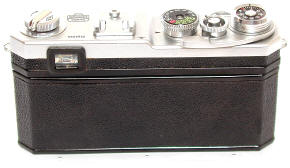 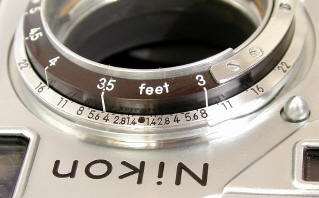 The RAREST S4 variation is probably this EP marked version.  The EP means it was made for sale in American Military base PX stores.

Unlike the great majority of S4's (90%?), the focusing scale in marked in FEET instead of METERS.

Since the S4 was made for the Japanese home market and not officially exported to the US or the UK, examples with EP engraving and FEET focusing scale are rare indeed.

Here are the S2 Black Dial, S4, and SP shown side by side: the S4 shares much with both cameras. 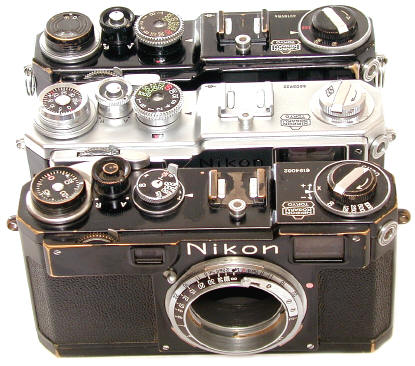 The S4 has a manually set frame counter and cloth shutter curtains like the S2, and a finder which amounts to a modification of the S2 with a wider field of view and 105 frameline added (but without the parallax correction of the SP).    The S4 also shares the SP's body casting, shutter mechanism and automatic flash sync,  but without the SP's self timer, motor drive lug, or the SP's much more elaborate finder.

Revised: September 12, 2017 .  Copyright © 1998-2016  Stephen Gandy. All rights reserved.    This means you may NOT copy and re-use the text or the pictures in ANY other internet or printed publication of ANY kind.  Information in this document is subject to change without notice.  Other products and companies referred to herein are trademarks or registered trademarks of their respective companies or mark holders.