The screw mount Canon V family enjoyed an extensive Canon system with lenses ranging from 25mm to 800mm and fast lenses up to f/1.2 ! 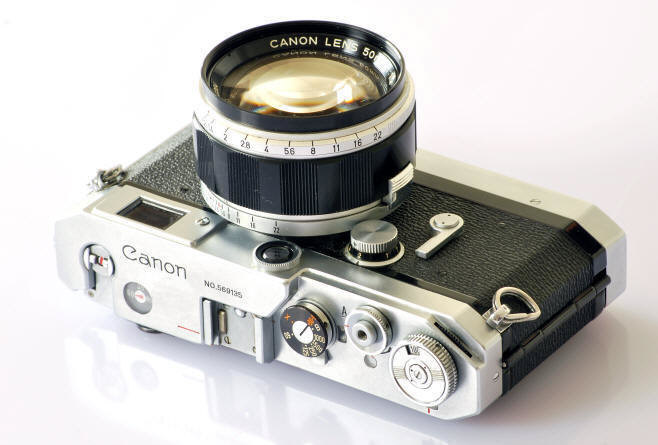 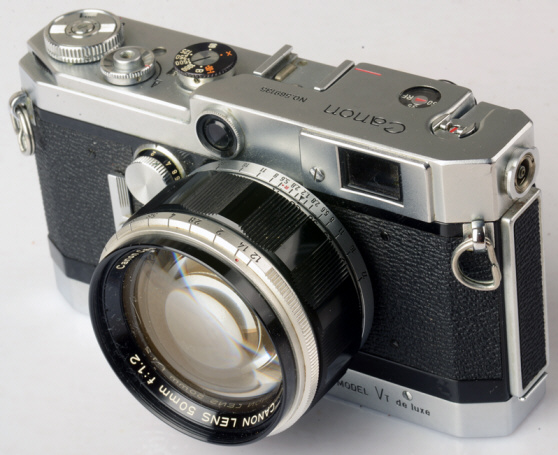 Once upon a time Canon was drastically behind Leica in the great camera race.  In fact, in 1956 Canon had always been  playing catch up with Leica!   Against the Leica M3's magnificently bright rangefinder/viewfinder, fast bayonet lens mount and faster lever advance,  Canon's best was the squinty eyed IVSB2 with its much slower to operate knob wind advance and screw lens mount.   It was no contest. Canon's hopes were pinned on a secret weapon:  the Canon V.   The new camera would dispense with that tricky advance lever and replace it with a faster bottom trigger advance AND an AUTOMATICALLY CORRECTED parallax auxiliary viewfinders! WOW!  Unfortunately Canon forgot about how inconvenient the trigger advance is for tripod use. Canon V sales never took off as expected.  From 1956 to 1958 Canon tried again and again with 9 excellent different model variations.   Personally I find these the most interesting and noteworthy of the Canon rangefinders. A half a century plus has proven the Canon V series tanks in reliability - actually more reliable than the Leica M series (as are Nikon Rangefinders, for that matter) !   Personally the L-1, VL and VTDM are my favorite Canon Rangefinders as they combine innovative features with tank like construction.  To be clear, all are Leica Screw Mount cameras and mount practically all Leica Screw Mount lenses -- by whatever manufacturer.   Canon RF Lens INFO HERE 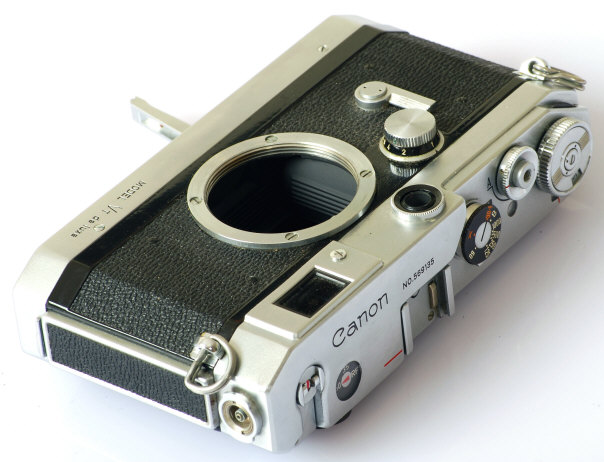 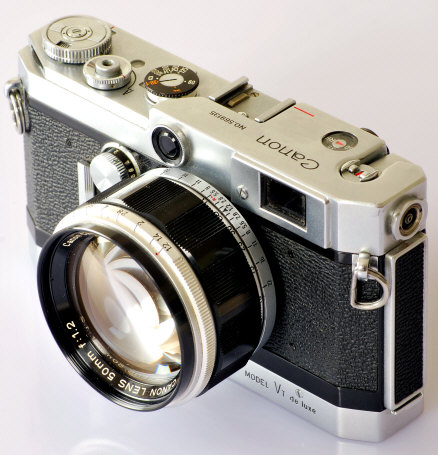 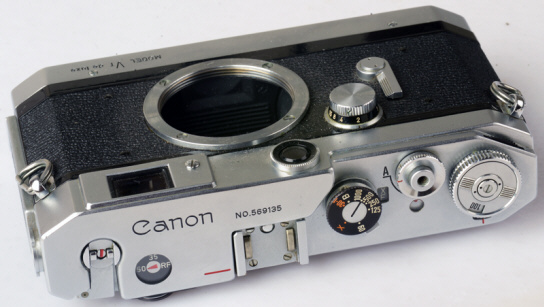 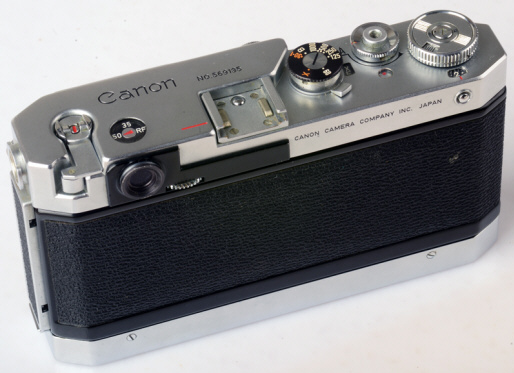 Canon had a postwar history of making slightly modified knob wind Leica Copies....until the Canon VT in 1956.   The VT is an important camera in Canon history because it showed for the first time that Canon wanted to be a leader in innovative 35 system rangefinder design.     Leaving the Leica inspired knob winding bottom loading design behind them, Canon came up with an inspired design of their own.      In  one area, the VT and its siblings have no equal. 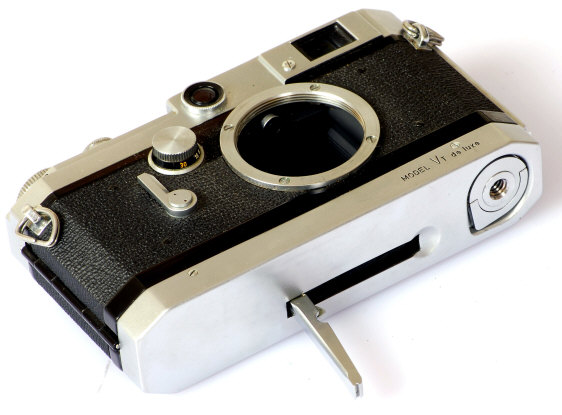 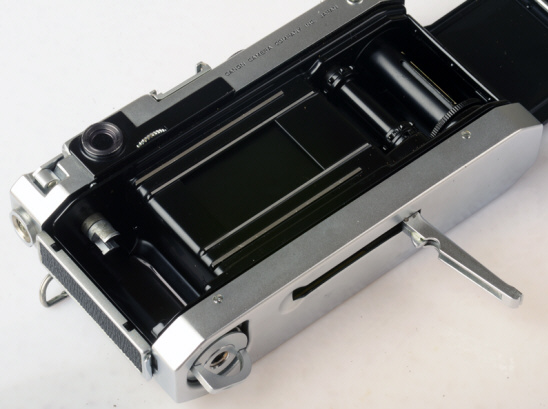 Canon kept the Leica Screw mount on the VT, but that was about all.  The main method of film advance was changed from a top mounted knob wind to a bottom mounted Leicavit inspired trigger.  In the VT design, however, the bottom trigger was permanently mounted.   The tripod socket changed ends to mount a trigger wind grip.    Canon ads of the time promoted how fast the trigger wind was.  It was true, but they neglected to mention that with one hand on the shutter release and the other hand on the trigger wind, you were out of luck of the subject moved and you needed to refocus.   For the first time, Canon used a swing open back on its top of the line 35,  which was MUCH easier to load than the bottom wind Canons.    The VT used a traditional cloth shutter curtain, which would be replaced later the series with a close to indestructible but sometimes wrinkled stainless steel curtains in the VTDM, VL and VL-2.   Shutter speeds ranged from 1 second to 1/1000th, plus T and B.  About the only thing which seems out of place is the manually set frame counter.   Canon self timers made its first appearance on the top of the line Canon VT. 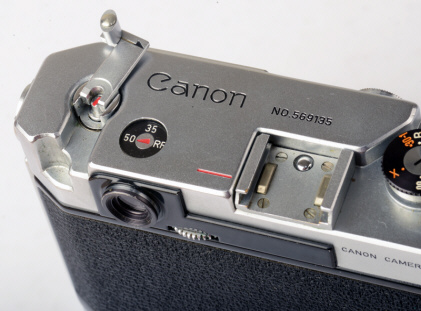 The VT family  kept its predecessor's separate high and low speed shutter dials. Some people forget that these "old" style rotating high speed shutter dials  make double exposures very easy.  All you have to do is rotate after the exposure till it catches, than take another shot.    The rotating collar around the shutter release acted as the rewind switch.    The wheel beside the viewfinder selected one of 3 different rotating prism viewfinders (all without brightlines and parallax correction),  the 35, 50, or higher magnification RF which was roughly the same as a 135 viewfinder. 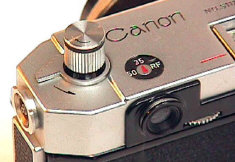 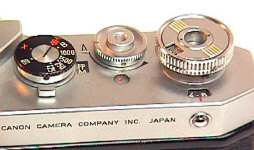 One of the VT's biggest advantages was its 3 position viewfinder with three rotating prisms giving it three different viewfinder magnifications.  See that wheel below and to the right of the eyepiece?   The photog could use it to select the 50, 35, or "RF" finders as indicated on the top plate above the finder.  Here it is set to the 35 finder.  The "RF" position is roughly equal to a 135.   While a  relatively bright combined RF/VF, there was no framelines or parallax compensation in the finder.    Compared with the later Canons of the V/VI  series which followed, the VT has a warm toned gold rangefinder patch, instead of a cool colored silver patch.  Over the years the earlier gold tone RF image  has proved to age better with a brighter image and less flare.   The recessed film rewind knob was raised by pushing that little lever marked by the arrow next to it.   Canon introduced its bayonet locking flash gun connection with the VT, which  would last to the last Canon RF -- the 7sZ.  Notice the raise up knob rewind here illustrated on a Canon VT.

The top right deck sported the auxiliary knob wind knob, which was activated by the button on the top deck's back edge.   It was useful and necessary to use the VT on a tripod.  The lever beneath the high speed shutter dial selected the flash sync type...between various types of flash bulbs and electronic flash. 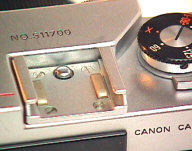 The crowning glory of the V / VT series  is in the accessory shoe. To the left is a little ball at the top of the accessory shoe.  This is for AUTOMATIC parallax correction finders. Too bad Leica did not copy the idea. It has a shutter lock, and separate low and high speed dials.   A series of black viewfinders with the necessary linkage was made in 25, 28, 35, 50, 85, 100, and 135 focal lengths. The 50 and longer focal lengths had bright line frames.  Two universal zoom finders were also made, one for wide angles, another for telephotos.   Personally, I prefer the better images of the separate finders.   This is really a great auxiliary finder system, the best that has ever been produced for a 35mm rangefinder. 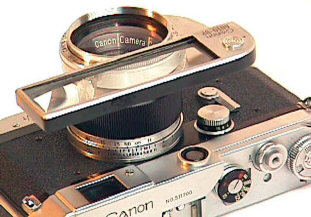 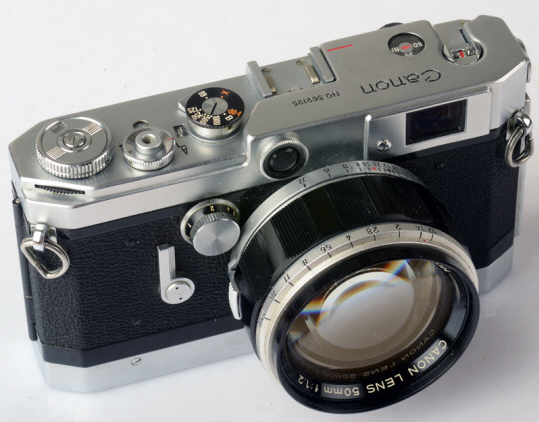 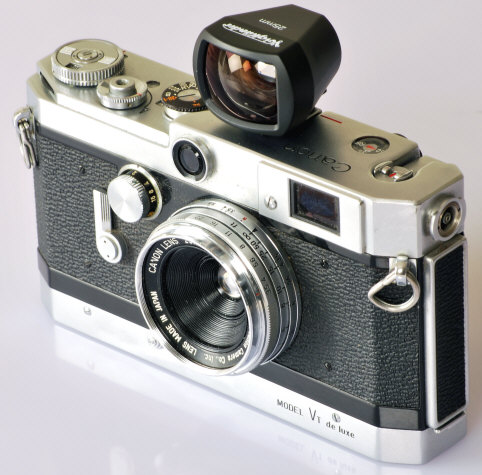 Revised: April 09, 2020 .  Copyright © 1998-2020 Stephen Gandy. All rights reserved.    This means you may NOT copy and re-use the text or the pictures in ANY other internet or printed publication of ANY kind.  Information in this document is subject to change without notice.  Other products and companies referred to herein are trademarks or registered trademarks of their respective companies or mark holders.