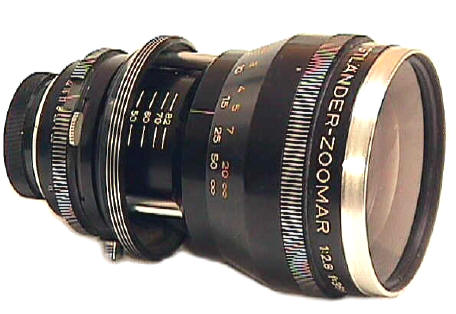 Designed by Dr. Frank G. Back of Zoomar in Long Island New York and produced by Voigtlander in Germany, the 1959  36-82/2.8 Zoomar was the world's first production zoom for 35mm still cameras.  Dr. Back and Zoomar had previously produced Zooms for TV and movie cameras.  Looking back today, it's amazing how much he got right from the start.   Dr. Back succeeded in obtaining a very useful wide to short tele zoom range, with a fast 2.8 aperture and a convenient   single zoom control ring.   He not only invented the lens, he invented the term "Zoom" as it applies to 35mm lenses.  Prophetically, the 36-82 was introduced to America at the Philadelphia camera show that also introduced the Nikon F and Canon Canonflex to the American public.  Who would have guessed??

Today collectors usually associate the  36-82/2.8 Zoomar   with Voigtlander's  excellent leaf shutter Bessamatic SLR.    Actually the Zoomar was introduced from day one in both Voigtlander Bessamatic and Exakta mounts.    Later it was also produced in other mounts, including  42mm screw Contax mount, which would later become known as Pentax Screw Mount, and for the Kodak Retina SLR.   The Zoomar 36-82 was introduced in May 1959, but not generally available until 1960.

Optically, the Zoomar 36-82 was a great breakthrough, made possible according to Dr. Back by new rare earth element glasses and computer aided optical designs.  The 36-82/2.8 used  14 elements in 5 groups (3 movable and 2 fixed).   Focusing done by moving the front group of a single element.      Standard close focus is 4 1/2 feet, but two close up lenses were available -- the Focar A and B -- which provided focus as close as 10 inches.     How did it perform?  Not as well as single focal length lenses, but very adequately for its general purpose intentions. 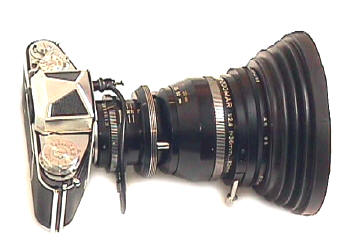 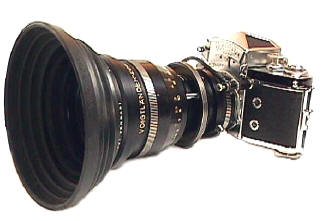 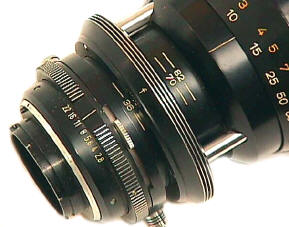 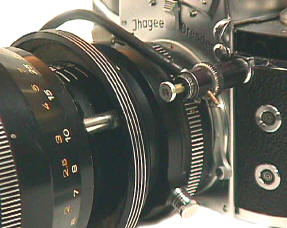 Notice the large easy to grip controls.   The focusing ring barrel so large it actually makes up about half of the lens exterior surface.  The large ribbed zoom control zoom ring  rides on three chrome posts, allowing zooming with a push/pull motion. In the left pic, the zoom control ring is at about 40 mm.  Between the zoom control and the aperture ring is the chrome ribbed aperture cocking lever.  Remember the 1960 Exakta did not have an instant return mirror or automatic diaphragm.  Once the shutter release lever was pushed (the push button in the right hand pic), the connecting cable stopped down the lens aperture just before the shutter opened.  The aperture cocking lever then had to be reset to open the lens to maximum aperture for easy focusing.   The aperture ring can not be moved unless the lens to camera cable release is attached.   Two chrome machined posts on the aperture ring make for even easier f/stop selection.   The Zoomar's marvelous machining and heavy duty construction is a beautiful thing to see in today's world of plastic, plastic, plastic.     That's right folks, they don't make lenses like this anymore. 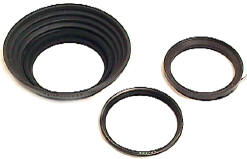 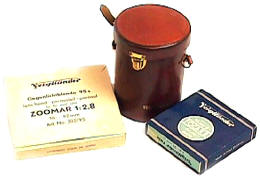 The huge rubber shade, the 95mm Focar, and the push on lens shade adapter. 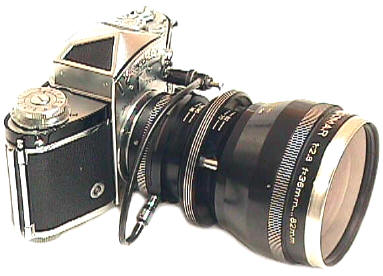 From a collector's standpoint, it's difficult to find a more impressive or more important Exakta lens than the 36-82/2.8 Zoomar.