Fake Russian "Leicas" or  How do you keep a good Communist on the farm when he has seen the American Dollar? 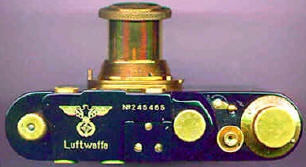 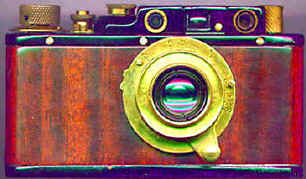 One of the MANY fake "Leica" variations.    Pics sent to me by net surfer wishing to identify his "Leica."   No real Leica EVER left the factory looking like this!

"Gold Leica" with snake skin body covering,   complete with 50/3.5 "Elmar" and "Leica" Top plate.  Photo courtesy and copyright of Yong Lee.  This same style can be found with the Luftwaffe engraving as shown on the upper illustration.  I almost forgot, it also has a "Gold"  "Leica"  lens cap.

Startled visitors to 1995 American camera shows found   new  "Leicas" not listed in ANY Leica reference book.     These "Leicas" were mysteriously sold out of suitcases by new "dealers" with strong Russian accents.    Occasionally they admitted just getting  off the plane from Moscow.

The variety and innovation was startling.  It reminded me of a magic wand being waved with the command "Leicas  be innovative and multiply, with lots of military and Nazi engravings."   It was an amazing sight to see, often 50-100 rare "Leica" cameras at a time, in different colors, finishes, and with amazing never seen before Nazi engravings.

Had the wily Ruskies discovered a lost hoard of rare Leicas?  War booty from Hitler's Berlin?  Alas, no.  But what the Russians did discover was Capitalism and the American Dollar.    The great majority of these innovative "Leicas"  were converted from  knob wind Zorkis.   The earlier Zorki was a copy of the Leica II,  and apparently produced near Moscow in great numbers...hundreds of thousands in fact.

So why do I keep calling these  "Leicas?"   Because,  that is  how  the top plate is  engraved....well at least most of them!!   In Leica style no less, complete with 50/3.5 "Elmar."   Some savvy,  capitalism corrupted Russian was smart enough to realize that near worthless  Zorkis  engraved with "Leica" and various Nazism would be worth real American dollars.     These instant collectible would literally fly off his shelves via Aeroflot,  to the foolish Americans  waiting in line to turn over the all mighty coveted American Dollar.

I have no idea who turned out these little gems, if it was one technician, a team of them, or a whole group of small competing companies.    But they must have done it with huge smiles on their faces, knowing they were defeating the American capitalists at his own  game.   Stupid Americans!! Buying Zorkis with Leica engravings....HA HA HA HA.    Of course the quality was not up to Leica standards, nor were all the little details correct.   These cameras could not fool any seasoned Leica collector, but could easily fool the non Leica person.

But our innovative story of capitalism does not end here.    Our heroes were not satisfied with merely engraving "Leica" on hapless Zorkis.  No, here we see the true spirit of innovative marketing,  the likes of which would make the legends of American Capitalism proud.

You see, instead of merely contenting themselves to copy Leicas,  the Russian heroes of this story started inventing new "Leicas," the likes of which no one had ever seen before.    I like these guys.

After several years the newness wore off, sales slackened, and the fake "Leicas" stopped appearing at American camera shows.    In 1998 the demand is starting to catch up with supply, and the few which show up for sale are selling much faster, and for more money.

While the above "Leica" conversions were done more in the spirit of fun,  a new more serious copy started to appear at a much higher price.  These "Leicas" are  of relatively high enough quality, but not good enough to fool the serious Leica collector.  Along these lines I have seen relatively nice copies of 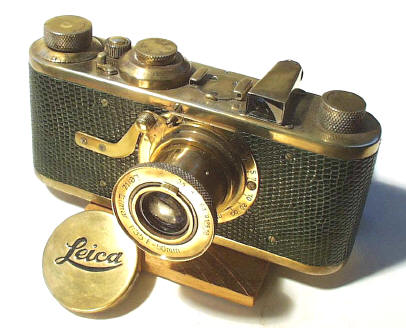 Alas, all that glitters is not Luxus.  Behold a rather well done Russian Luxus.  Pic courtesy YK Wong.

Who knows what "Leica" lurks in the shadows of Moscow, waiting to pounce on the American Capitalist?  Three cheers for the American Dollar!!

Please note this story was written from the perspective of what I have seen at American camera shows.   If any of my Russian friends would like to supply more exacting details, I will be happy to correct my corrupt capitalist treatise.