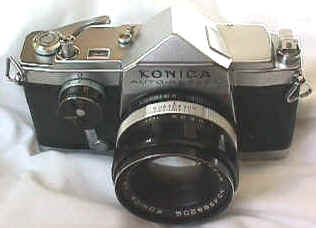 Spoiled as we are today with computerized automatic exposure and autofocus SLRs, few remember the world's  FIRST focal plane shutter 35 mm SLR with Automatic Exposure and interchangeable lenses, the Konica Auto-Reflex of 1966.    For its time, the Konica's shutter priority exposure  was amazing.    Unlike the Minolta Maxxum AF revolution which followed decades later, the AE (Automatic Exposure) revolution was slow to catch on amongst skeptical photogs.   After all, how could it ever be as accurate as match needle?  It didn't make sense.  Konica made an all-out effort to capture the market, however, offering an expansive 13 lens range from 21mm to 1000 mm, six of which offered AE exposure.   Unfortunately, Konica was ahead of its time, AE just didn't gain the acceptance or popularity that it would in the 1980's and beyond.  Claims that AE's popularity came as educational systems began to break down ----  turning  out sub par graduates who were no longer literate and couldn't think for themselves,   much less reed complicated instruction books,  has not been substantiated. 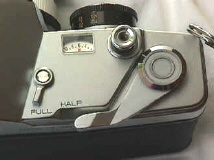 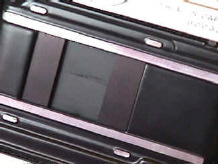 As amazing as the AE exposure was, the Konica had another trick which  has yet to be duplicated.   With a flip of the switch on the top of the camera from "FULL" to "HALF,"  the photog could switch ANYPLACE on the roll from full to half frame, and  THEN BACK AGAIN as many times as they wanted!  It must have driven the photo labs nuts.  Every exposure could theoretically alternate between full and half frame.   If you want to play a trick on your local lab, this is the way!   Full frame is the standard 24x36mm neg size.  Half frame  is 24x18mm.  The idea of half frame is getting twice the number of shots per roll.  It turns a 36 exposure roll into 72!   The pics above show the full/half frame selector lever and the half frame mask which would make the negative.

Have you priced a HALF FRAME NIKON or PENTAX?   They are special order items (when available) for a lot of bucks.  Yet, if you add a Konica made Nikon adapter or Pentax screw adapter or Exakta adapter, you turn the Auto-Reflex into a Nikon or Pentax or Exakta half frame camera!   The Auto-Reflex had a less expensive meterless brother called the Auto-Reflex P which also featured full and half frame capability.   Today it is very difficult to find.   To avoid confusion, it's worth mentioning that the Auto Reflex had a different bayonet mount than its predecessors, the Konica FM, FP and S.   Lenses from those cameras would fit with the Konica lens adapter.

Notice the extra long shutter release pull, necessary at the time due to the limits of technology.   The meter was external, combined with the shutter speed dial in front of the shutter release.   The rewind lever was very  robust and quite a bit of engineering.   The opaque plastic window on the prism lights the viewfinder display!  Other Auto-Reflex strong points include:

The Konica is VERY well made and finished.   This is a nice camera.