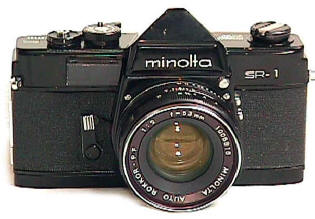 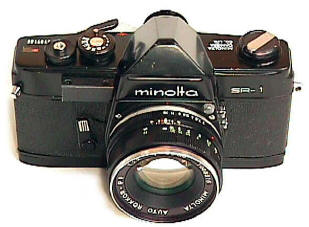 The Black SR-1 was one of Minolta's earliest black production cameras,  and one of the hardest to find Minoltas. Strangely the SR-1 was not Minolta's first SLR,  that honor belongs to the SR-2.  The SR-1 was longer lived however, going though at least five variations from 1959 to 1965.      Unlike the SR-2, at least this variation of the SR-1 has a true automatic diaphragm. Unexpectedly the "automatic" mechanism is in the body, not in the lenses.   If mount a semi-automatic diaphragm SR-2 lens on this SR-1, the lens works automatically!   If you mount the automatic SR-1 lens on the SR-2, it suddenly becomes semi-automatic -- meaning it stops down automatically but the aperture does not re-open until the film is advanced! 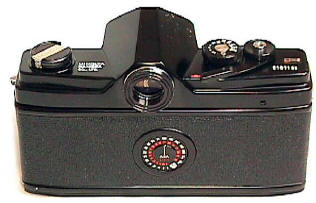 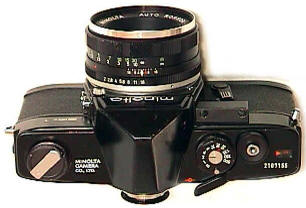 Notice the bar in front of the shutter speed dial.  That is the mount for the clip on accessory meter.  This SR-1 has a top speed of 1/500th, the meter mount, no depth of field preview.  Like the earlier SR-2, this SR-1 has a ratcheted 180 degree advance and a non-rotating shutter speed dial.   This particular example has a bright for its time large central ground glass focusing screen, surrounded by very visible by fresnel rings.  The SR-1 moved the frame counter from the left side as on the SR-2, to the more traditional location near the shutter release. 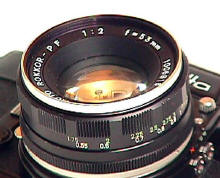 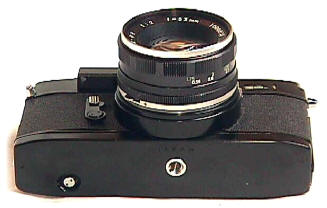 The 53/2 Auto Rokkor PF mounted here seems to be one of the rarer SR normals. That's right,  53 mm.  It has a  52mm filter size, a close focus of 24 inches, and weighs in at compact 7 oz.  By this point in time the chrome lever which locked the aperture ring on earlier lenses was used as a stop down lever, allowing the aperture ring to rotate freely.

SR-1 Variations:  Minolta must have liked the SR-1, apparently at least 7 variations were made.  The different models  are confusing, in no small part because official Minolta publications are sometimes incorrect!   Many collectors refer to Cooper & Abbott's "Minolta System Handbook," which erroneously lists the SR-2 and first version SR-1 as having an automatic diaphragm!