The only bad thing I have to say about the T90  is that it does not have a  Nikon name plate, but I guess you can't have everything. 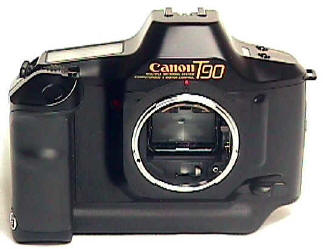 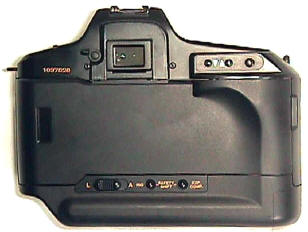 Introduced in 1986,  the Canon T90 was years ahead of anything else on the market at that time.    It is, quite simply, one of the best manual focus 35mm SLR designs of all time.   Many features of the T90 were later incorporated into the EOS.  Personally though, I like the total design of the T90.   It gets my vote as the best Canon Design ever.   I've been told Japanese Photojournalists called it "The Tank" for its ruggedness.   Features include: 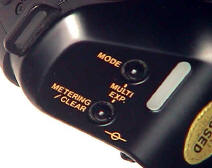 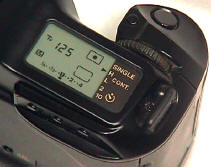 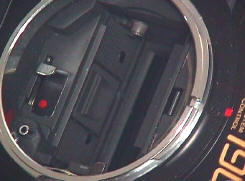 A silicon cell in the bottom of the mirror box reads flash off the film plane during exposure.

The shutter has a blind to shut out extraneous light for self timer or intervolmeter shots.     The Canon right angle finder which fits over the square eyepiece is hard to find, but the Contax right angle finder is still in production and works just fine. The T90 is powered by the easy to find anywhere on the planet AA batteries.....too bad this was not continued in the EOS lineup.

Negatives?  The designers did have one oversight -- no PC flash sync outlet.  At one time Canon offered a service to add sync outlets at  their authorized repair stations.   Obviously it can still be done by a good repairman.  You can get around it by using a small flash or radio control on your camera to slave fire your strobes.

A bigger disadvantage is that parts are getting harder to get.   In 1998 Canon stopped providing parts for the T90 in the US -- though I do not know parts availability in the rest of the world.   But the thing that bugs me the most is the T90 does not say "Nikon" on the front cover!  Oh well.

The T90 is part of the huge Canon FD system -- the 2nd largest manual focus SLR system in photography.  With a wide choice of bodies and virtually any accessory or lens, the Canon FD System is a versatile professional system capable of practically anything in 35mm.   While some will argue the virtues of Canon FD glass Vs Nikon, for all practical purposes they are very very close to the same.   The best lenses for the T90 are Canon's L series, which includes my Canon favorites: the 14/2.8, 24/1.4, 50/1.2, and 85/1.2.

Canon had four breech mount variations: 1) the original R mount for the 1959 Canonflex 2) the FL mount which used stop down metering   3) the FD mount which used open aperture metering and  4) the "bayonet" mount modification of 1980 introduced for quicker lens changing.     Types 1, 2 and 3 are identifiable by the R, FL, or FD designations on their filter ring.   Type 4, sometimes called FDn by its admirers, sometimes called not so nice names by its detractors,   is identifiable by its black plastic mount which rotates the lens on and off the camera, rather than rotating a metal breech lock like the previous versions.  These later lenses sometimes have plastic barrels which the earlier lenses did not.   Personally I prefer the last mount due to it's MUCH faster lens changing.   Purest claim the earlier mounts are better made and stronger...some even going so far as to pay a premium for those lenses.   While the R mount lenses have the same breech mount and back focus, their internal mechanics will not mate with later cameras to offer either metering or auto-diaphragm operation.  Be careful mounting R lenses to later camera bodies...you may damage your camera, or lens, or both.

For years Canon made a big deal of its breech mount, claiming it would show much less wear over the years than a bayonet mount (like Nikon's).   The disadvantage  is slower than bayonet lens mounting,  various linkages protruding beyond the end of the rear lens mount which makes handling the lenses not so easy in your camera bag, and rear lens caps which often do not go on quickly.   But, you get used to it after a while.  It's interesting to note that after more than two decades of competing with Nikon's bayonet mount and singing the praises of their own  breech lock mount, Canon switched to a bayonet mount for their autofocus EOS cameras. Hmmmm.

The T90's strong point is the overall integration of a very intelligent and well thought out design.  The sum is more than the individual parts.  You really have to use it to know what I am talking about -- a rare combination of great handling,  intelligent controls,  and incredible versatility.

Right now T90's are very under priced for what they are.  It is only a matter of time until prices start going up.

Revised: November 14, 2011 .  Copyright © 1998-2002  Stephen Gandy. All rights reserved.    This means you may NOT copy and re-use the text or the pictures in ANY other internet or printed publication of ANY kind.  Information in this document is subject to change without notice.  Other products and companies referred to herein are trademarks or registered trademarks of their respective companies or mark holders.