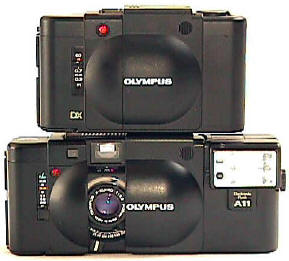 Often overlooked today, the classic compact 1979 Olympus XA and the 1985  XA4 offer a lot of compact camera for the buck.   Both are amazingly small and compact, complete with their built-in clamshell covers.   Few full frame 35 mm cameras are as convenient and easy  to use as "take anywhere" pocket cameras.

Olympus really went out all to create a notable camera in the XA.   A lot more advertising dollars than usual went into praising their unique design.       The XA  is  a tiny 35/2.8 RF coupled electronically shuttered Aperture priority Automatic Exposure camera.    No manual over-ride is possible than over-riding the meter by changing the 25 to 800 ASA range.    Shutter speeds are needle indicated in the non-parallax corrected brightline .55x finder.     Powered by the standard SR-44 1.5 silver oxide battery, the XA will live on for years without battery available problems.

The XA was a groundbreaker.  Its six element five group 35/2.8 lens was a unique design calculated to shorten its  physical length in order to have the rigidity of a non collapsible lens. I am not sure if this is the smallest full frame 35 with a built in Rangefinder, but I think it is.    The XA  is smaller than the notable Rollei 35 series, yet it includes automatic exposure and a rangefinder! Wow. The bright brightline Albada finder has parallax correction marks.  Focusing is from 2.8 feet to infinity. While the finder indicates shutter speeds between 1 to 1/500, the XA's shutter will actually go down as low as 10 seconds! It uses a super smooth electromagnetic shutter release. Built in extras include a self timer, a battery check, and tripod mount.   The instruction book advises not to press the shutter release while you are checking the battery -- you run the risk of quickly running down the batteries and leaving your shutter wide open until new batteries arrive. A closed clam shell automatically locks the shutter release.     Shown to the right are the XA's small film advance wheel and super smooth Electro-magnetic shutter release. 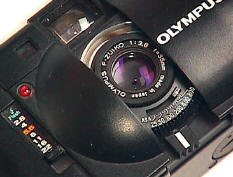 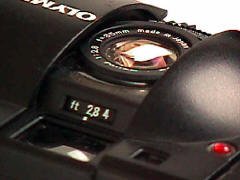 The  XA's controls are uniquely laid out to save space. You select your aperture by moving the aperture scale vertically on the front of the camera.  Moving it to the top turns the flash on.    On the front below the lens is the ASA selection dial,  and the tiny rangefinder focusing lever. From above the photog can see the focused distance.  While the XA is an aperture priority,  you have limited exposure control  by using the 1.5 stop backlight exposure lever or by adjusting the film speed for a particular exposure.

The four flash units for the XA series are about the only thing I don't like about these small cameras. They are just too big for the size of the camera, and the special connection does not allow for the use of a standard flash unit.  These dedicated flash units have direct flash only capability and attach to the film rewind end the camera.    Bounce flash is not a designed option, though you can fake it a bit by installing your own upward facing reflector (tape and cardboard will do it).   The XA flashes only work with 100 and 400 films, and don't provide TTL (Thru the Lens) exposure control. Personally, I leave the XA flashes at home.     Without the help of your friendly camera repairman who can install a standard flash connection, you will not be able to use standard flashes with any of the XA series.    Of course,  you could use a second slave flash.     It would take some experimentation to get the exposures right, but if the application was important enough it could be worth it. 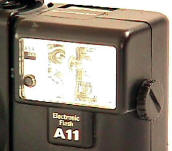 These flash units have special contacts which fit into the side of the camera.  The screw there attaches them.   The cameras have a flash switch (on the top of the aperture dial for the XA, below the ASA index on the XA4) which switches the camera over to flash operation and turns the flash on -- popping up the little ready light on the flash.  To turn the flash off, push the ready light down.

The little lever here is a combination self timer, battery check, and backlight compensation.   Also shown is the button rewind.  The battery check will make a continuous beep   if the battery is good.  Intermittent or no sounds means you need new batteries. 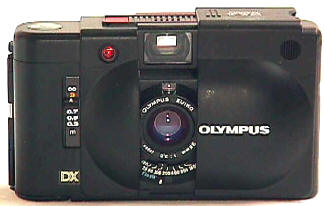 The XA4 Macro uses the same body as the XA, but substitutes a zone focusing 28/3.5 lens and programmed exposure.     It's "Macro" only focuses to 12,"  but that is a lot closer than the XA's 2.8 feet.  While the XA was a best seller and easy to find today, the XA4 is hard to find.  In place of the XA's aperture scale, on the XA4 you will find a focusing scale.   Notice the large DX film setting label, something new for the time.

The XA4 is not well known today, since it was made only for about a year.    Today it is quite hard to find and sells for more than any of its clamshell cousins.  The only XA4 test I saw  was published in Petersen's Photographic in August 1985.     Some XA4's were made with a "Quartz Date" back to imprint date and time. 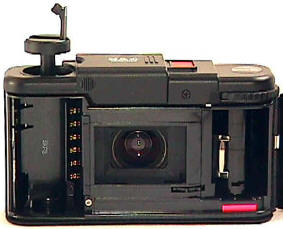 All models have easy film loading.   The clamshell has to be closed before raising the rewind lever to open the back.   Notice the XA4's DX film contacts.

The XA1, XA2 and XA3 all amount to simplified and cheapened versions of the XA.

The XA1 was a simplified XA, using a selenium meter which required no batteries, and a 35/4 lens fixed focus lens and programmed exposure.

The XA2 used a 35/3.5 lens and scale focusing.  Programmed exposure.    The XA-2 also came in a variety of bright colors.   The different colors command high premiums only to the criminally Olympus nutzoids.  No, these are not considered "collectibles."

These little camera are  great shooters and well worth looking for.    Their small size pretty much nullifies the need for a Submini like the Minox,  at least for me. 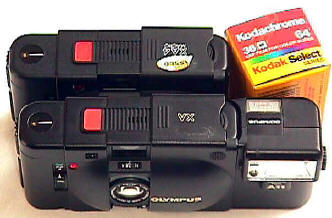