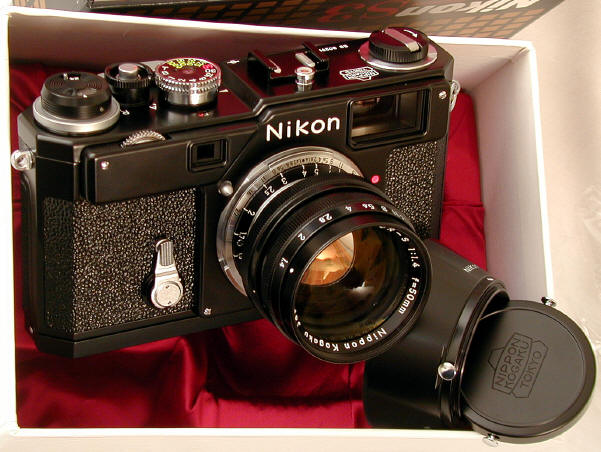 Introduced with the S3 was a new formula multicoated 50/1.4 Nikkor lens. It is the only multi-coated normal yet made in Nikon rangefinder mount, and is presumably the sharpest ever, the beneficiary of over four decades of optical improvements. 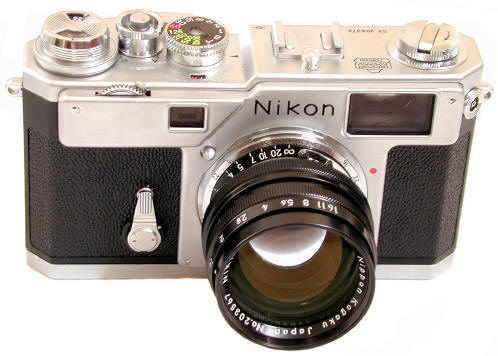 It was quite a production to produce S3's again, as all the original dies were long gone, and Nikon had not produced a hand assembled camera since the F2 stopped production in 1978.   Originally Nikon announced only 2000 of the chrome S3 2000. The camera proved so popular however, I am told over 8000 factory orders were placed before order taking was closed.  Most S3 2000's  were sold in Japan, with relatively few being officially exported.   This resulted in an over-saturated Japanese market, with many dealers sending the chrome S3 2000's  back to the factory.   A Tokyo dealer friend of mine believes Nikon made new black paint covers and backs for 2000 of the chrome   cameras in in order to sell them, though I have not heard of any official confirmation or denial from Nikon.   Many long time Nikon Rangefinder fans believe that the black paint S3 2000 should have been made from the start. 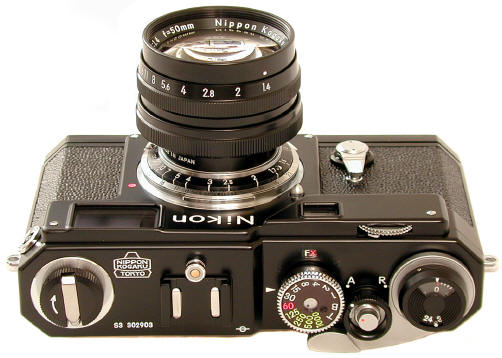 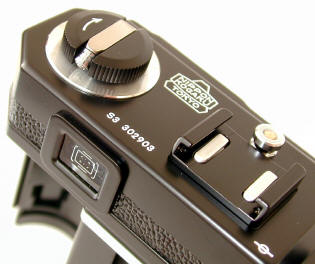 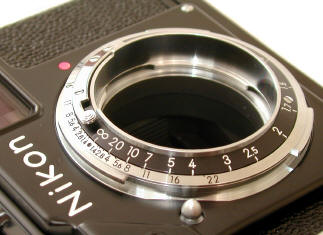 Unlike the SP, the S3 frame brightlines are not projected, but etched on, as shown here. While many would have preferred a new SP 2000 rather than S3 2000, few would have liked paying the much higher price due to a much more SP complicated finder system.   The black S3 2000 paint has a different appearance than the classic black paint.  This finish is a bit less glossy and does not appear to be sprayed on.  The paint is much more "perfect" in terms of the paint finish evenness.   Long term I believe the rarer black S3 2000 to appreciate much more rapidly than the chrome.   Classic original black SP or S3 cameras are often priced  5x to 7x more than their chrome cousins in the same condition.    IF you buy either version, KEEP the boxes!! 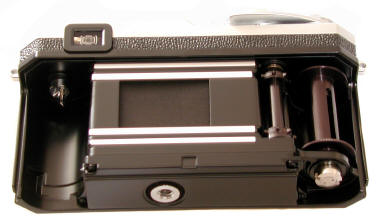 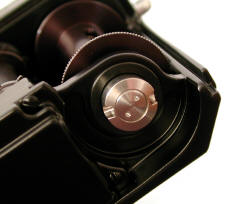 Though no new motor drive was announced with the S3 2000, it does have the S3 motor lug to connect to the classic and extremely hard to find S36 motor. 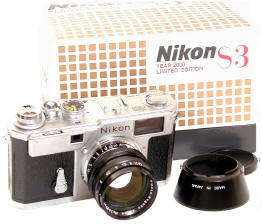 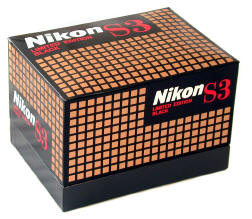 The interior boxes for the chrome and black S3 2000's are the same design, with different color combinations and inscriptions.

The chrome box proclaims "Year 2000 Limited Edition" while the black box is "Limited Edition Black."    The outer shipping boxes and the camera case box are identical. 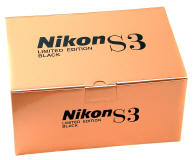 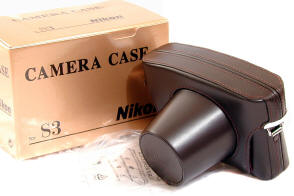 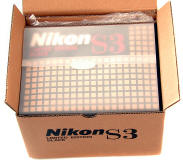 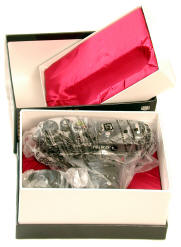 The camera case has a much longer snout than the classic case, due to the much larger 50/1.4.

Differences between the S3 2000 and the original S3

Please note these small differences add up to no practical difference. The differences in the back prevent a S3 2000 back from being passed off as an original S3 or SP back, although the backs will interchange perfectly. 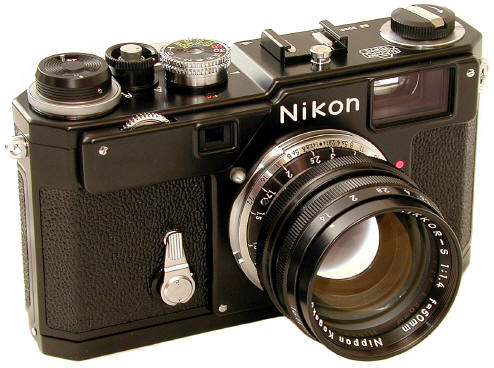 The original 1958 S3 was bought only by photographers to shoot pictures -- what a strange idea. The S3 2000 is bought primarily by collectors for collectors.   Not many shooters are going to pay an average of $5,000 for a camera that will lose 1/3 or more of its value once it shows a little wear.     I doubt if many S3 2000 cameras will ever have a roll of film run through them, as they are destined to live their lives safely in their boxes, being sold an traded amongst Nikon Rangefinder collectors.

Aug 2000 Update:  According to Mr. Shibata, who has worked with Nikon developing the new S3, Nikon cut off the orders at 8000 cameras.   Production by hand assembly is only 300 per month, so it will take years for all of the new S3's to be delivered.  Deliveries will start in the November 2000.    Nikon's cost is more than the selling price of the camera, over $6,000 each.    He states that no more lenses or Nikon rangefinder bodies are planned at this time.

As Mr. Shibata pointed out, it's important to realize that these 8000 orders are from customers who have never seen the camera.      It is his opinion that not only is the new S3 of better quality and workmanship than the original SP (including the finder),  but that the new S3 actually has better quality and workmanship than the legendary Leica M3.     He believes that once the S3 2000 is released that only a small number will be available for resale, while a much larger customer base will want the camera once its quality is realized.   Mr. Shibata believes this will result in used   S3 2000's selling for more than their original price.   Previous rumors are reported below for comparison's sake.  Alas, reality does not always match our hopes.

Dec 2000 Update: S3 Recall:  There was a small problem with the locking of the infinity lock on wide angle and telephoto lenses, Nikon recalled the few S3's delivered so far to correct the problem.

Rumor predicted the new  S3 would be called the S5, have TTL metering,  and that it would be introduced with a  four new lenses: 35/2.5, 50/1.4, 85/2, and 105/2.5 lenses.   Initial production run is believed to be 2,000.  It was rumored that BLACK enamel would be available too, but initially only the chrome was offered.  The S3 Millennium   is a classic retro style rangefinder after the same collector's market as the Leica M6 Millennium,  at a premium collector's price.   A later, more modern style RF was hoped to follow.  I was hoping for a new SP.  2003 update -- Nikon says there will be no more Nikon Rangefinders, or Nikon RF lenses.

Ironically the 35/2.5 was rumored to be a modified Nikonos lens, which itself was a modified Nikon Rangefinder lens!   The range of lenses suggests a 35 to 105 finder, which could be the zoom finder a friend of mine saw several years ago.  It will be truly exciting if Nikon succeeds in making a worthy modern Nikon S mount rangefinder in classic tradition, with a production lap of only 36 years! (1964 to 2000).    Another interesting question is motor capability.  I guess it would be too much to dream about compatibility with another off the shelf Nikon motor, like the MD-12 or MD-4, or come to think of it, maybe the MD-2 would be a better choice.     Wouldn't be great to shoot the SB-28 on your new Nikon Rangefinder with all its TTL flash features?     On the other hand,  perhaps the first one should be along mechanical lines with just the modern addition of a FM-2 style LED TTL meter.

There is a frustrated demand for a Nikon Rangefinder, 36 years worth of frustrated demand. The only mistake Nikon could make with this product is not making it part of their long term product line.  Here's hoping for a new family of Nikon Rangefinders, along both classic and modern technology design lines.   My thanks to Yasuhiko Tanaka and Hiroshi Kohsaka for their help.

Revised: September 12, 2017 .  Copyright © 2005  Stephen Gandy. All rights reserved.    This means you may NOT copy and re-use the text or the pictures in ANY other internet or printed publication of ANY kind.  Information in this document is subject to change without notice.  Other products and companies referred to herein are trademarks or registered trademarks of their respective companies or mark holders.