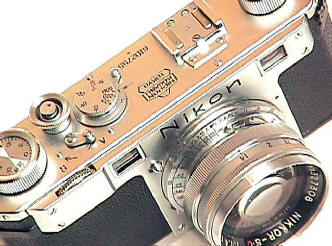 Much more numerous, less expensive younger brother of the Nikon One and Nikon M

The second most  numerous Nikon rangefinder with over 36,700 made,  the S sells for a small fraction of  the M, and a very small fraction indeed of the Nikon One -- making it the least expensive Nikon Rangefinder.     It was Nikon's first big sales success, with over NINE times the sales of the earlier Nikon One and Nikon M combined.    A big part of this was the marketing success of Joe Ehrenreich  and his Ehrenreich Photo Optical Industries -- the American importer of Nikon.  The S was the first Nikon to be officially imported into the US.    Like the One and M before it, the S is built like a tank, in fact much heavier built than the S2, SP, S3, S4, S3M that followed.

Today the S is noticeably the less expensive Nikon Rangefinder, due in part to its slow working knob wind and rewind.  Before dismissing it, take a second look.  There is something quite nice about the S's high level of metal craftsmanship, though the leather often wears easily.   The finder may not be quite as nice as the S2 or SP, but it's better so far as I am concerned than the flare prone S3/S4 and quite comparable to its still popular competition, the screw mount Leica IIIf.

The secret to being very happy shooting your S is the Variframe 35-135 finder.  Most of these finders, a half century after the fact, are missing the all important chain and metal cap.  Many Nikon collectors have never paid much notice to those chains and caps, many have never seen them -- most chains have broke off and get themselves lost.  So why am I making such a big deal about them ?   Because that stupid metal cap contains a magnifier.  It fits over the RF/VF, providing about a 2x magnification.   The idea is use the high magnifier RF to focus, and to then use the auxiliary viewfinder to view.  In practice it works quite well, though it take a bit of getting used to it.   No other RF has used the idea since,  2001 might be a good year to revisit it.    Nikon even made a separate magnifier attachment which fit into the shoe, allowing other viewfinders to benefit of this idea besides the 35-135 Variframe.   Unfortunately, I don't think these wonderful gizmos were exported out of Japan.

A slow working camera with knob advance and rewind and a double lock detachable back, the S still has the advantage of a relatively bright rangefinder image.     Compared to the earlier M, the S has smaller advance and rewind knobs, but a larger shutter guard.   Strangely, both share the a non-standard 24x34mm format.  To its credit, the S is noticeably better made than the earlier M or Nikon One.    The S continued the Nikon tradition of having a serial number on the inside of the back, as well as on the top plate.   Make sure they match up when you are buying one, as mis-matches reduce the value considerably. 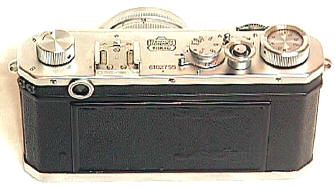 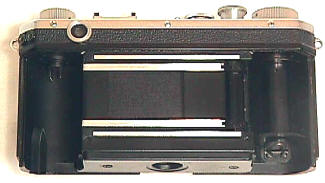 The S shutter usually needs servicing if it is in original condition.  Shutter curtain replacements are not uncommon.  Notice the bumps underneath the back leather  -- a common aging problem not only for the S, but for the M and One as well. 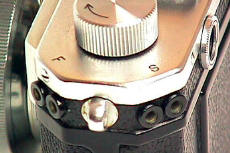 The S shares the double prong sync connections of the earlier synced M.  The S camera  connections are labeled on the top plate, the M camera connections on the top plate sides. The "F" side stands for the "Fast" shutter speed range of 1/20th to 1/500th for use with GE 6, No. 31, Sylvania FP 26, and No. 2A flash bulbs.   The "S" stood for "Slow" shutter speed range of 1 second to 1/8th second, to be used with GE-SM, No. 5, 11, Sylvania SF, Press 25, and Press 40 bulbs.    Today the S flash connectors are hard to find.    No Nikon electronic flash units were made for the S - -or for any Nikon rangefinder for that matter -- only flash guns for the now hard to find flash bulbs.

Robert Rotoloni was probably the first to point out the rare variations of the S in his superb book Nikon Rangefinders.  The rarer S variations are:

With some patience and good auxiliary viewfinders, the S can make an excellent shooter.

Many are used from time to time because it once belonged to a family member.

Revised: September 12, 2017 .  Copyright © 1998-2002  Stephen Gandy. All rights reserved.    This means you may NOT copy and re-use the text or the pictures in ANY other internet or printed publication of ANY kind.  Information in this document is subject to change without notice.  Other products and companies referred to herein are trademarks or registered trademarks of their respective companies or mark holders.