Virtually impossible to find, it's the stuff that Nikon collector's dreams are made of 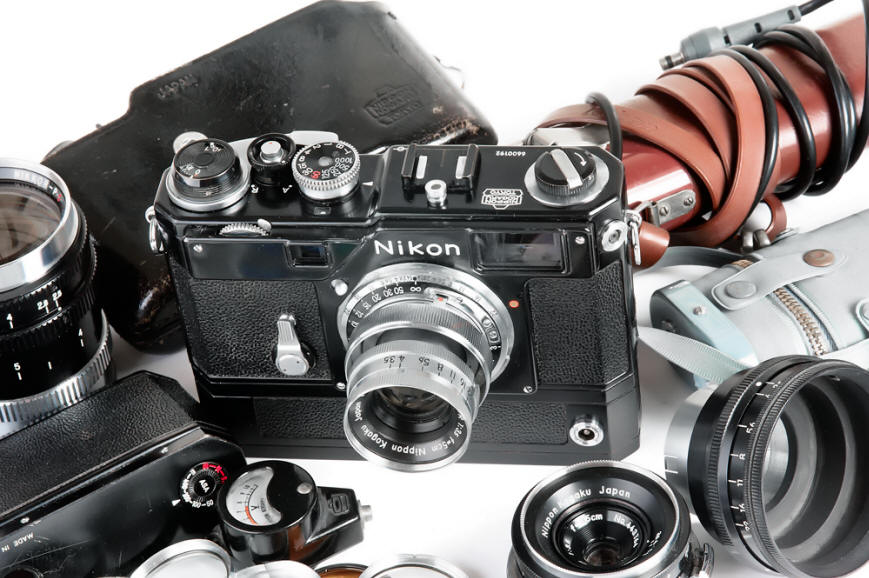 Per Bob Rotoloni's iconic The Complete Nikon Rangefinder System book, 195 S3M's were manufactured.  The first batch was produced in August of 1960 and the 2nd batch in October of 1961.  S3M production was about equal between black and chrome bodies.  Most black S3M's have been found with the motor connection for the S72 motor drive.  Most chrome S3M's do not have the motor plate - though of course a motor plate can be installed within minutes.  That makes estimated total S72 chrome motors production is about only about 100 ( based upon the standard chrome 1960 S36 motors for full frame Nikon rangefinders).   The original owner of this outfit was a US Navy intelligence officer stationed in Japan.  Nearly all had the focusing scales calibrated in meters.  This camera is vey unusually calibrated in feet for that fortunate US Navy officer.  All S72 motors per Rotoloni were thought to be chrome ... until this unique black S72 motor turned up.   Apparently that US Navy officer had the pull to have Nikon produce a black S72 to his special order.  It seems safe to believe this unique black S72 motor drive is a factory product and not a repaint as the entire outfit stayed in the officer's family for over a half a century until put up for sale.   At this point in time Nikon had not produced a combined motor and cordless battery pack, necessitating the separate battery packs with connecting battery cords shown here,  worn on the shoulder or belt.   It should be proudly mentioned that Nikon produced a dependable pro quality motor drive out of the gate with the S36 drive.  Despite its greater motor experience and much greater rangefinder production totals, Leica never succeeded in producing a dependable professional motor drive for its rangefinder film cameras.  Those early S36 motors and later Nikon F motors were crucial in establishing Nikon as THE professional 35mm camera of the 1960's. 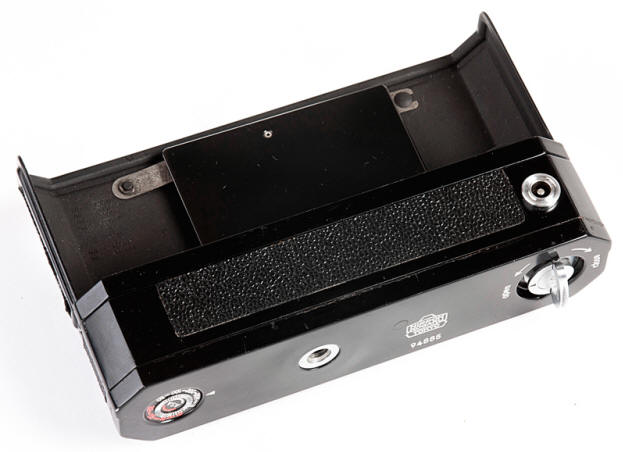 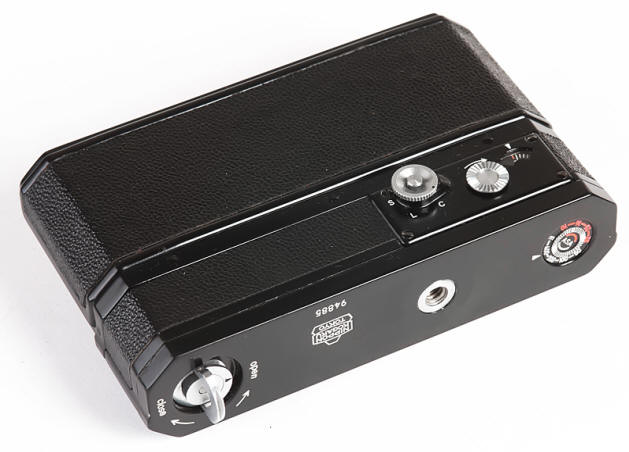 The black S72 motor appears to be a chrome S72 motor repainted black by the factory.  Super collector and Nikon Historical Society webmaster Fred Krughof has documented black Nikon rangefinder bodies and motors repainted from chrome to black by the factory.  It seems the factory had a higher priority of getting orders out schedule than waiting for the next batch of black camera or motor parts to arrive made to order.    What Wild and Crazy Nikon Factory Guys! 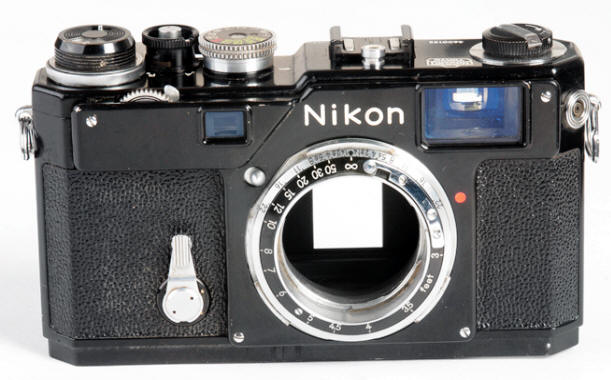 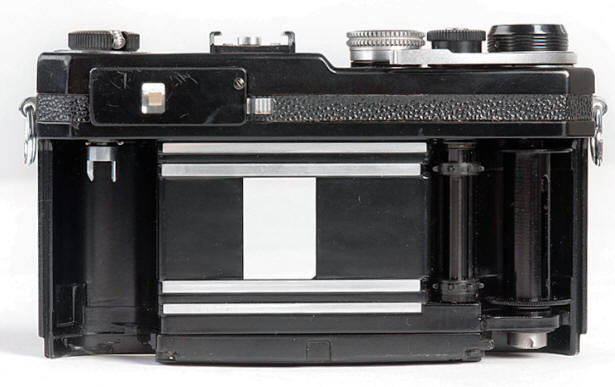 Notice the focusing scale in feet.  So far only 14  S3M's have been verified in feet, all black except two in chrome.  That is consistent with only black S3M's being officially imported to the US.

The S3M is a half frame camera with a 18x24mm film gate which give double the amount of pics per roll, half the size of a full frame camera.  S3M's are so rare many experienced Nikon collectors have never actually seen one. Suppose its 1960 and you are the Nikon exec planning the new half frame rangefinder camera.  Production will likely be only several hundred cameras.  How do you quickly and economically produce a new viewfinder for the new low production camera?  The solution chosen was modifying the S3 viewfinder by removing full frame 35/50/105 brightlines, and then adding selectable 35, 50, 105 framelines proportioned for the vertical 18x24 format.  Fixed framelines were used instead of  more costly moving parallax framelines.  Its worth noting the S3m is the only half frame Nikon rangefinder.  Canon marketed no similar rangefinder.  The Leica 72 half frame rangefinder was far simpler in design and offered no electric motor option.

So why did Nikon produce the S3M?  Bragging rights probably had a much to do with it as the slight pent up half frame user demand.  With unique rangefinder products like the 6 frameline SP of 1957 (not equaled in the frameline race by Leica until the M4-P in 1984), the world's only production professional quality rangefinder motor (S36 & S72), the 1000/6.3 Nikkor, the SP frameline illuminator for easier shooting in the dark (not equaled by Leica until the illuminated frames of the M240 over a half a century later),  Nikon executives LOVED to one up the competition! 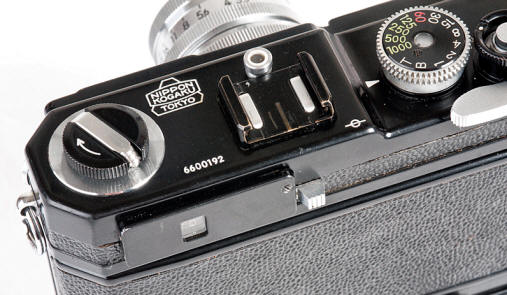 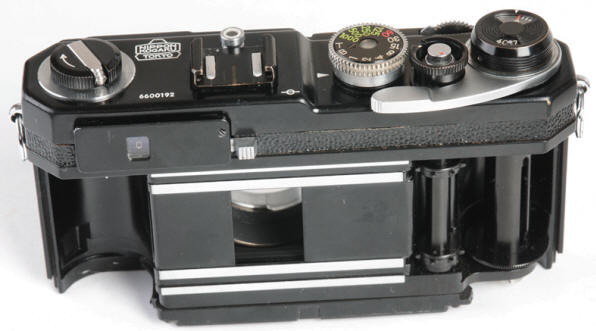 The chrome knob to the right of the viewfinder is the S3M's unique three position 35, 50 or 105 frame selector.    With less than 200 S3M's produced, Nikon apparently produced no half frame accessory viewfinders.

How about shooting a 21, 25 or 28 lens on your S3M?  Apparently the way to go is masking off your accessory viewfinder. 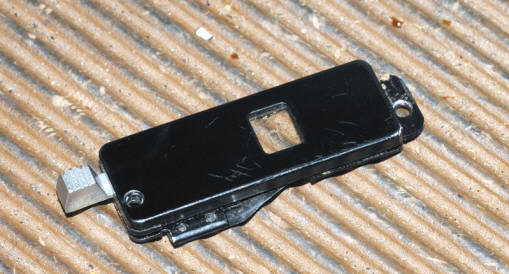 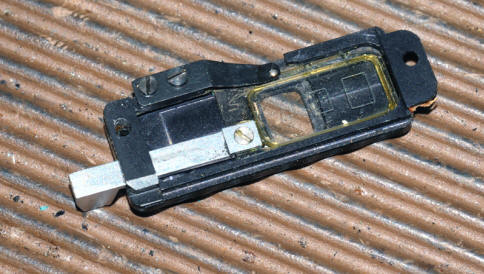 The sliding etched mask was a brilliantly simple frameline solution for such a low production camera.

Each frameline is labeled in cm, 3.5, 5, 10.5 and has parallax correction marks for close up focusing.  The 35 frameline  fills the frame completely, no room to guess 28mm framing! 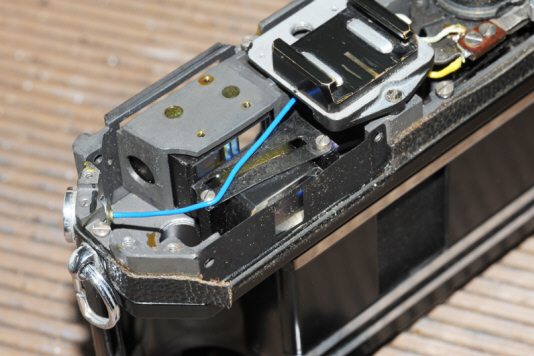 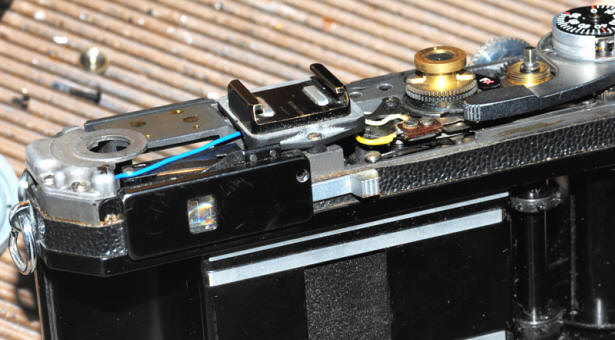 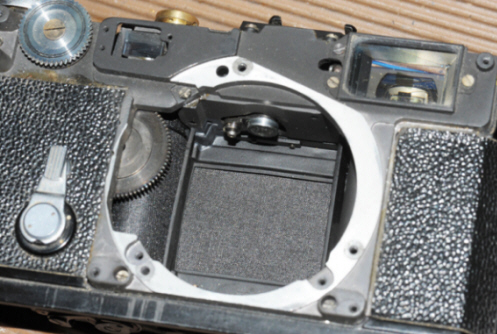 Even though the film gate was half frame 18x24 size, the shutter curtains are full size.  Producing a scaled down half frame body instead of modifying the full frame body would have been exorbitantly expensive for such a limited production camera. 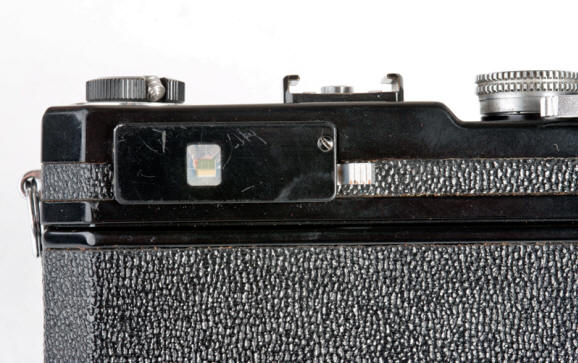 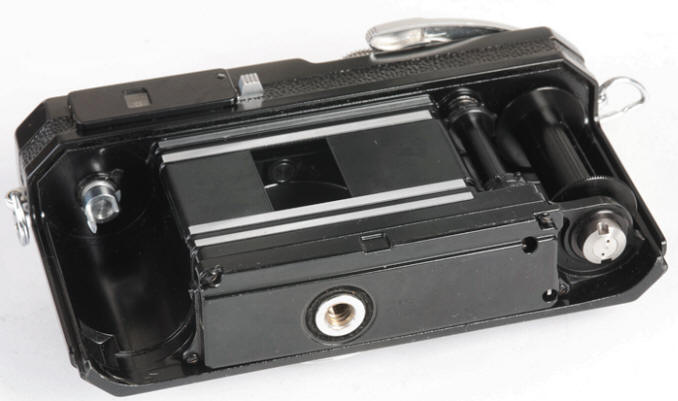 Notice the holes in the motor plate allowing mating with the motor drive.  Mounting Nikon S36, S72, or the similar Nikon F motors is easy.  Just replace the camera back with the motor.  Getting the motor to work right takes a bit of work.  First of all you need a motor plate like the one above designed to mate with the motor.  Sometimes you get lucky and they just work together. About 90% of the time the motor and body have to be adjusted to work together, which is best done by a trained Nikon technician. 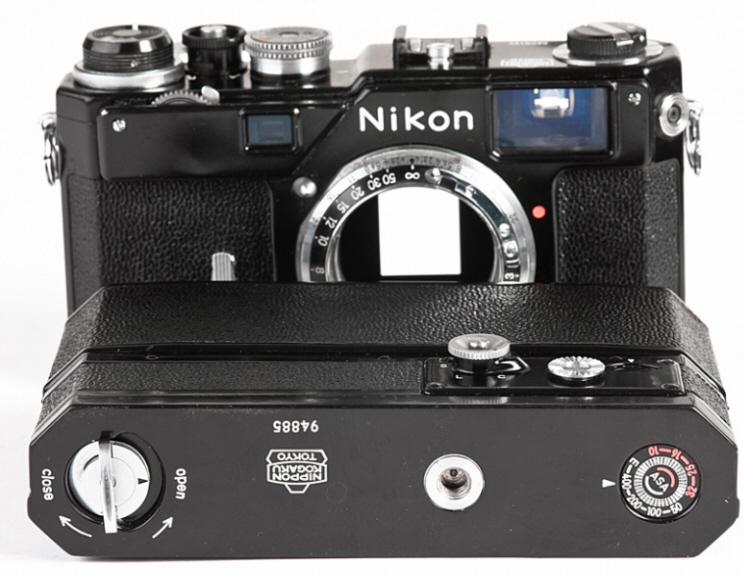 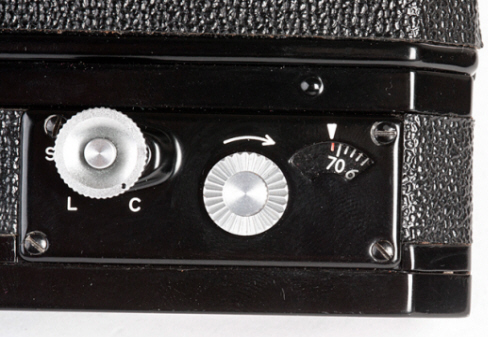 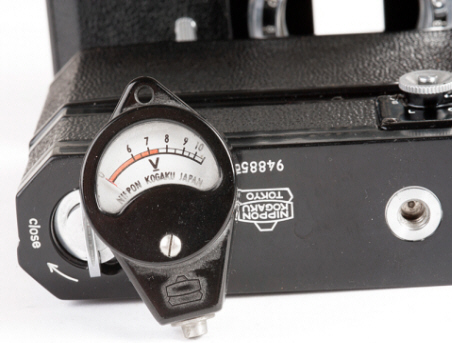 The S72 motor film counter predictably goes up 72.  The 10 volt meter is to test the smaller battery packs.   A later meter for the Nikon F (possibly late S36) went to 15 volts. 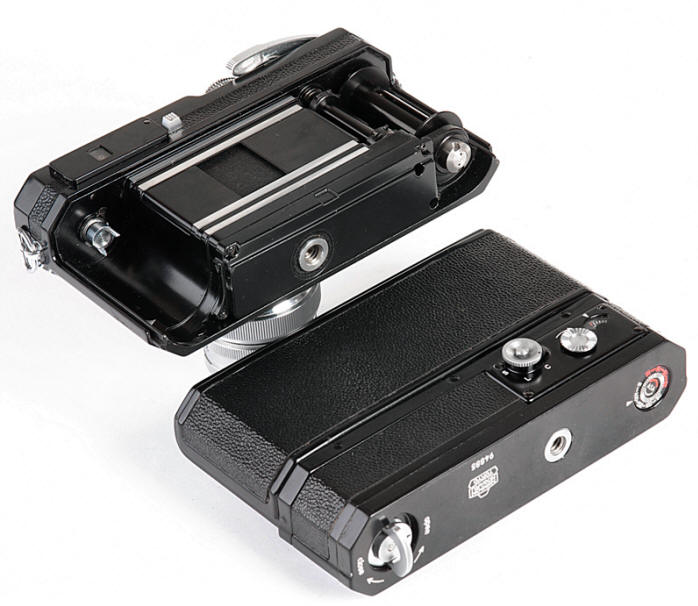 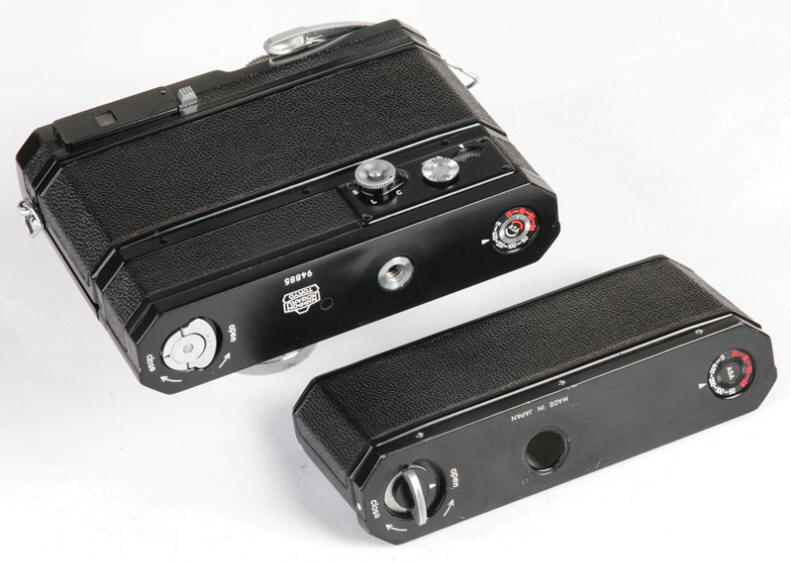 Woe to the Nikon rangefinder shooter who interchanges their camera back and motor drive in the field, and then walks off without one or the other! 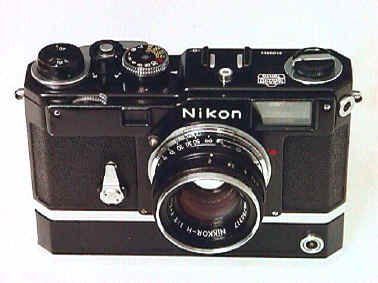 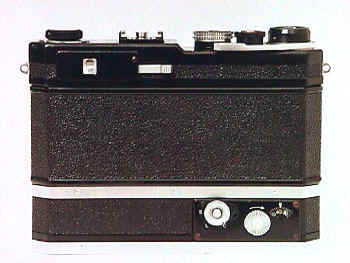 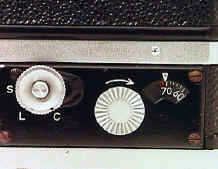 Here is the chrome S72 motor version. It looks a bit out of place on a black body, which could explain the reason for this special order black S72. 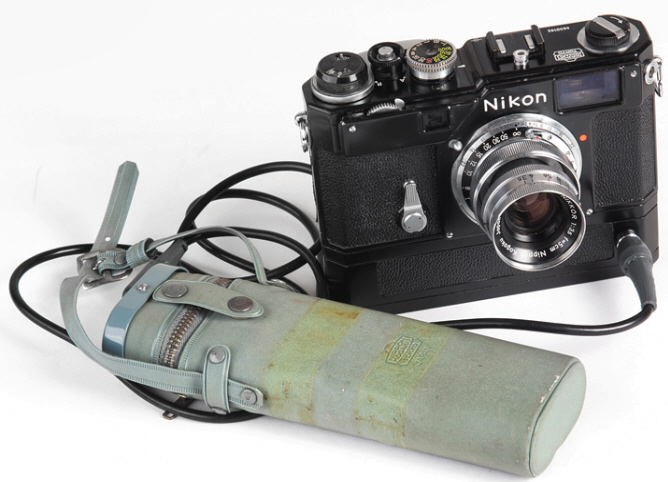 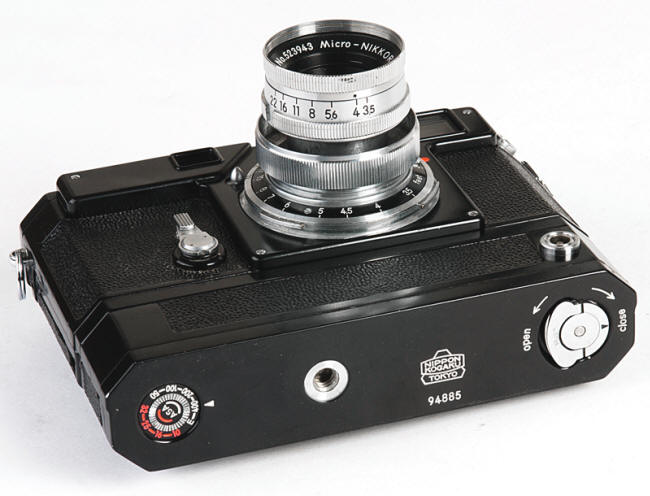 This Nikon motor set came with two battery packs.  Oddly the smaller green plastic battery pack for the earlier series of Nikon S36 motors taking 6 C cell batteries was included, along with a later period and larger brown Nikon F battery pack taking 8 C cell batteries.  The later S36 and S72 motors, easily identifiable by having no decorative button on the right front of the motor (like the one above) were wired for the larger capacity battery pack.  The green plastic 8 cell pack may have been delivered with some late S36 or S72 motors. 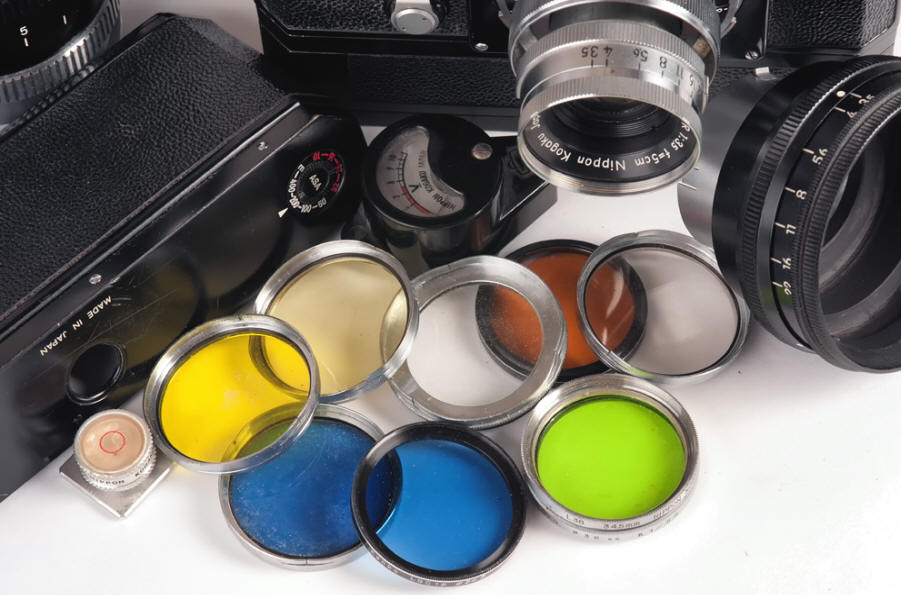 Interestingly this original Nikon S3M set was made up of a black 35/3.5, 50/3.5 Micro and 105/2.5 lens.   A box for a long gone 50/1.4 was also found.  The original photog ONLY had filters for 50/3.5, lot of filters for the 50/3.5, no filters for the other lenses.  So it would seem the 50/3.5 Micro was that US Navy intelligence officer's  most used lens.  What was he shooting?   The keys to that puzzle are the MICRO in the 50/3.5's name, the super rare focusing collar necessary to change f/stops on the 50/3.5 when attached to a Nikon copy stand,  and the close up diopter lens.  The 50/3.5 MICRO Nikkor was Nikon's 1st ever close up lens for its 35mm camera systems, designed specifically for the then very popular Micro Film photography.   The different color filters would have been useful to better show different color inks in B/W.  The first and only Nikkor 50/3.5 Micro rangefinder lens test in American photo magazines ONLY test the lens for a close up Micro film photography.  That first magazine test described the 50/3.5 MICRO as an APO lens, but that claim seems to be missing from later 50/3.5 MICRO descriptions.  Suffice it to say, the 50/3.5 MICRO was very sharp for its time! 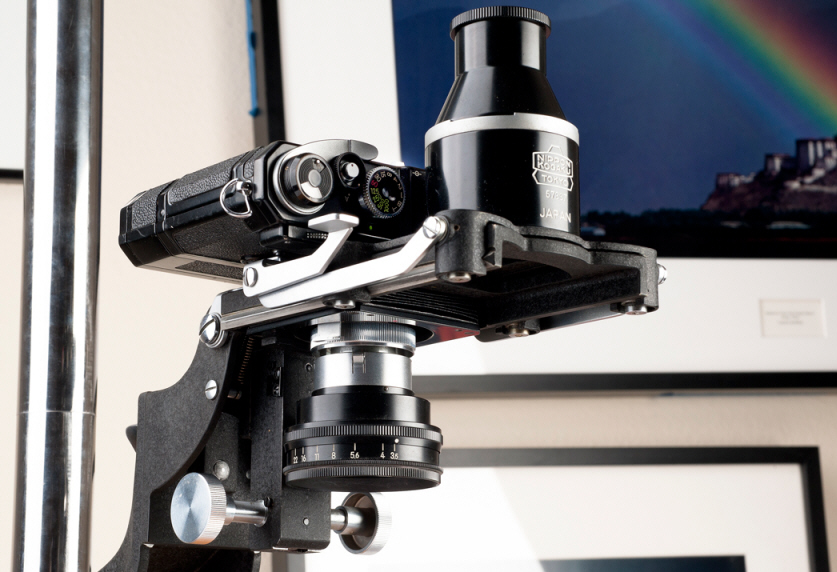 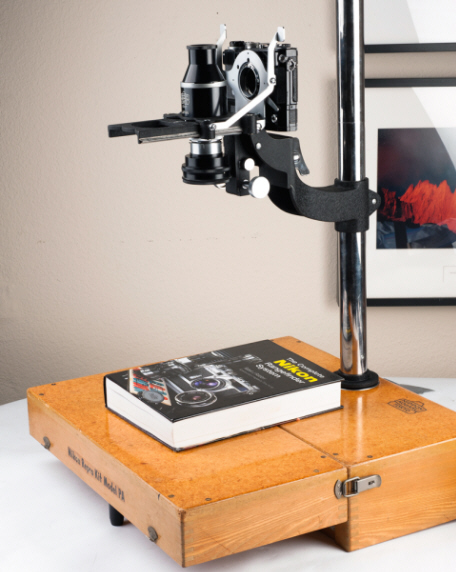 Nikon S3M with S72 motor, 50/3.5 MICRO lens with focusing collar mounted on Nikon Rangefinder PA Copy stand.  It's an easy task to mask off the copy stand ground glass from full to half frame. 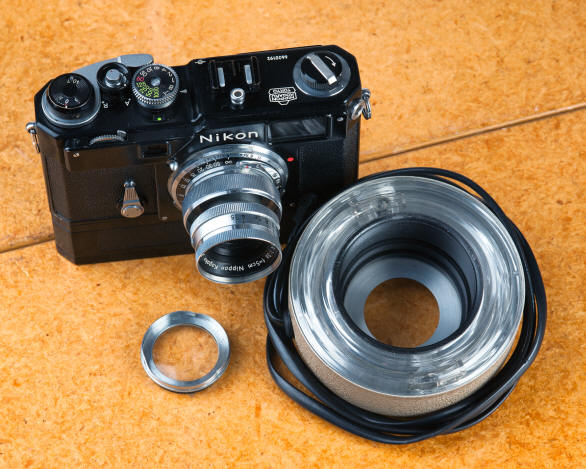 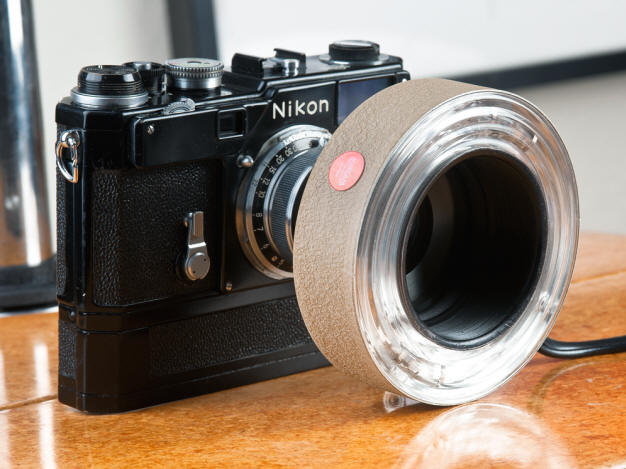 While the copy stand does a great job, mobility is not its strong point.  Notice the wear in the hot shoe and the close up diopter.  An electronic ring flash was also part of the original photog's outfit.  In the early 1960's that was one exotic piece of flash equipment!  The ring flash appears to be AC powered, although the power pack is now missing.  The wear in the accessory shoe may indicate a battery power pack.  Combine the ring flash with the close up diopter and MICRO lens and you have a compact close up outfit. 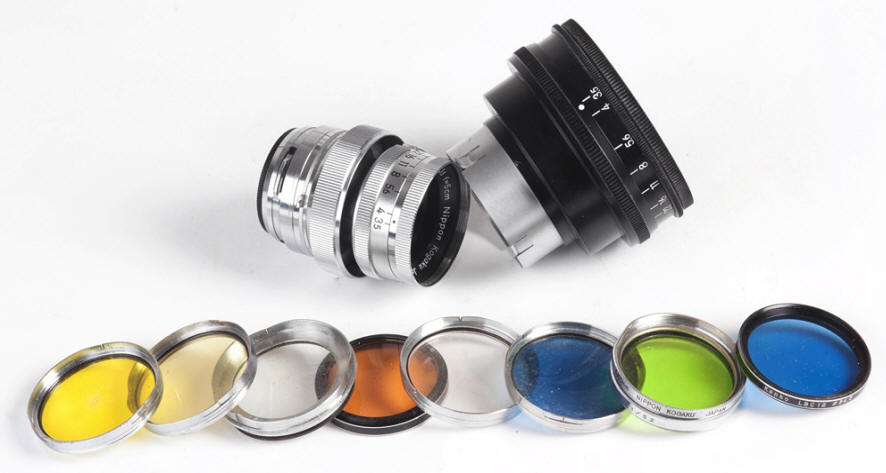 CHECK BACK - MORE WILL BE ADDED

Revised: September 12, 2017.  Copyright ©  1998-2016 Stephen Gandy. All rights reserved.    This means you may NOT copy and re-use the text or the pictures in ANY other internet or printed publication of ANY kind.  Information in this document is subject to change without notice.  Other products and companies referred to herein are trademarks or registered trademarks of their respective companies or mark holders.