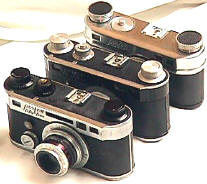 The story of the 1938 Perfex, a wannabe low cost Leica from the Candid Camera Corporation of Chicago -- the funniest Leica Copy?

Argus succeeded extraordinarily well in 1936 by creating a low cost 35mm camera, the Argus A.   In 1938 Chicago the time seemed right to make kind of an upgraded Argus, with interchangeable lenses, shutter speeds with a fantastic range of 1 second to 1/1250th, rangefinder focusing, built in meter, and focal plane shutter.  If Argus could sell hundreds of thousands of cameras, surely the concept of a real low cost Leica like camera couldn't miss.  Carl and Joseph Price teamed with Benjamine Edelman aiming  to become rich in their new endeavor, the Candid Camera Corporation.  Like Argus, they were in the radio business before they went after the really big money in the camera business.

Despite an outstanding list of specifications,  all  Perfex models endured design faults, questionable workmanship,  and so so dependability.    Shooting with a Perfex today can often become an unintended adventure.

The first Perfex was the 1938 "Speed Candid."  The Speed Candid had the honor of being the first American made focal plane shutter 35mm camera.    A curious and ungainly combination of Bakelite and metal body construction  with an Argus A type removable back and distance scale focusing, the Speed Candid actually had advanced features compared to its competition, the best selling Argus A:

As the already established best selling Argus A could match none of the above features, it would seem the Speed Candid would have a chance at sales success.   Alas, the inappropriately named Speed Candid was crudely made and difficult to use.   The rangefinder was often difficult to see in bright light.  The rangefinder was not coupled...meaning the photog had to transfer the measured distance to the lens.    The controls were awkwardly designed, with the viewfinder on the far right end of the camera, while the shutter release is on the left side.    Taking pictures with it was a real chore, much slower than the smaller and lighter Argus A. You will have a hard time finding a more oddly designed 35mm camera than the Speed Candid,  not that the task would be impossible.   Not too surprisingly, to many Speed Candids seem to have survived their owner's frustrations.  The Speed Candid is actually  rare, but thankfully not expensive.

The Perfex Forty-four of 1939 was an incredible advance over the 1938 Speed Candid.  It originated the basic design that would last for the next seven cameras...until the end of the Perfex line.   The Forty-four (I have no idea why they called it that) had an attractive body design that almost made it look like a competent camera:

The Perfex Thirty-three of 1940 was much  like the 44, except for its nifty black trim and lack of slow speeds.   Today the 33 is one of the rarer Perfexes.   Same body shells, many of the same parts...you get the idea. 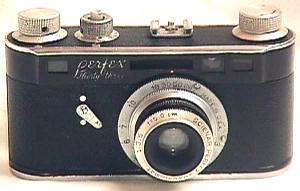 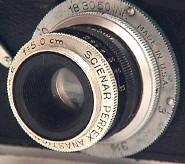 If Carl, Joseph, and Benjamin wanted to make a 35mm interchangeable rangefinder, they had to reinvent it to get around the Leica and Zeiss patents...and that is exactly what they did!!

Take a look at that lens mount.   It's a 38mm screw mount -- not 39mm like Leica.  The helical is built into the body like Contax, but since it is a screw mount, it gets around the Contax patent.    That's right, you focus by turning that large chrome ring at the base of the lens.    Don't turn the lens, or it may drop right off.   Take a close look at the shutter release.  Rather thick isn't it?  That's because it is also the film advance and the shutter dial.   While it is not a particularly convenient design, it side stepped Leica and Zeiss patents very well.   Look at the accessory shoe, see those contacts?  That's right, a hot shoe.  The classic Contax would never have one, and it would only take Leica another thirty three years to get one in the M5. 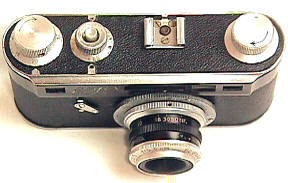 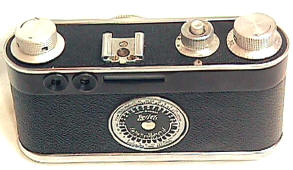 Meter?  Yep. That wide cavity below the accessory shoe on both sides of the body is the extinction meter.  I have long suspected they are called extinction meters because they became extinct.  It's actually a strip of film with numbers on it, showing progressive strips of exposures.   The idea is you look through the meter, determine the darkest one that you can still see detail in, and then match it up with the dial on the back to determine the exposure.  Not a bad idea really, except it didn't work too well. It seems our brains have a compensating feature in them which makes it difficult to accurate determine the right exposure number.  You know, its also the same compensating feature that makes it so difficult for humans to find the right mate.   On the other hand, the Perfex had a compact built in meter 33 years before Leica.  hmm. 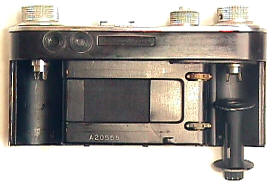 With the back removed, you can see one of the Perfex's technical feats, the first American built 35mm focal plane shutter. Unfortunately it wasn't terribly even across its travel, but who would know?  Loading the film was not easy, though you had plenty of room to do it. It still took two hands, to hold the cassette and the film spool down. 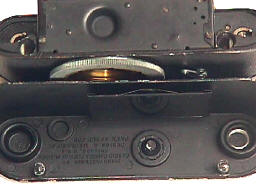 Worst film back locking design?   OK folks, the big award is finally here, the CameraQuest award for worst film back design --- Perfex by a mile.    Look closely at the little wings on the bottom of the camera, shown in open and closed positions. Those are the locks for the removable back.  Very strangely, they rotate in opposite directions to be open or closed.  But that is the good part.  Take a look at the photo above.   Notice two holes at the ends of the front body cage?  They are for the two posts in the bottom of the film back that rotate to lock the back.  You got it, they are the other ends of the rotating wings.   The killer part of the equation is that the tips of the posts are little half moons -- which can rotate out of position.   When this happens, as it has on this 33, you can easily have a delightful half hour or more trying to remove your camera's film back.  What fun!

The Perfex Fifty-five of 1940 looked very much like the 44, which it was except for various minor modifications. 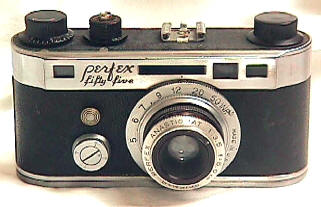 The slow speed dial is the larger dial on the front. The button above that was pressed in to rewind the film. 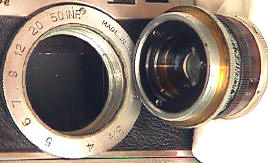 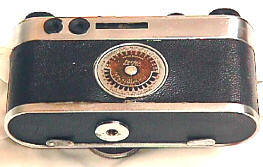 The 55 kept the horrendous back locking system of the 44 and 33.

After W.W.II the new improved Perfex 55 was not fairing too well with consumers, so Perfex did the honorable thing, they modified it into a lower cost camera -- three of them in fact.  The specs are in the table below. Aesthetically they had nice clean styling, a non-interchangeable lens with leaf shutter, and wow of wows, two big improvements.  The horrendous film back locking  system was replaced with a simple one turn locking system, and the film advance was moved to the far right knob like most other 35mm rangefinders. 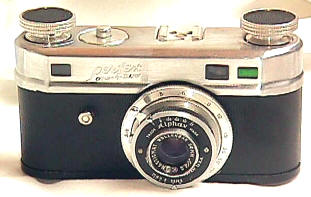 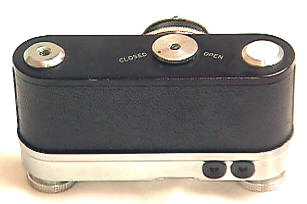 Alas, Perfex low cost dreams did not fair well in the market place either, and the  proud but wiser partners sold out,  yet another sad story in the big windy city.  Walter Winchell signing off.

Except for the first Perfex, the Speed Candid, apparently all of the focal planed shuttered Perfexes  had the amazing feature for their day of a synced hot shoe (for flash bulbs) -- three decades before Leica!