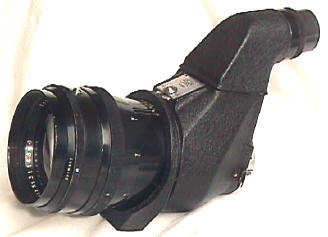 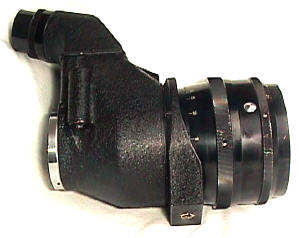 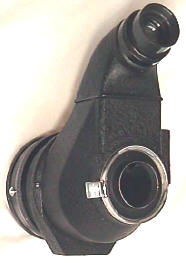 Originally produced for the 1936 Berlin Olympics, the 180mm f/2.8 Sonnar remains in production to this day.  It has a mysticism and history about it few other optics can even begin to approach.

This 1950's version Olympia was designed for the Zeiss Contax IIa and IIIa  rangefinders -- Leica's main pre-war  competitor.  Generally Contax had faster and sharper lenses, but  Leica handled better and was more dependable -- but that is another story -- another profile.

Pre-war Olympia's have chrome finishes and come in two flavors. The rarer original version is rangefinder coupled and  mounts directly on the camera body.  It was soon realized that rangefinder focusing was beyond Contax  limits with a 180mm f/2.8 lens, and the second reflex housing version was introduced.  It looked much like the above picture, only with a chrome lens.   This was not your father's SLR however, it was more like your great grand father's.    OK, let's see how easily I can explain this to the non-rangefinder folks out there.  The reflex housing, complete with mirror like your modern SLR, is that funny looking thing which mounted between the lens and the camera body.  A cable release connected the camera and reflex housing.  You pushed in the cable, which raised the mirror and tripped the shutter release.   Yes, this was SLR like ground glass focusing....well sort of.  You see, or rather don't see, a reversed image since the reflex housing only has a mirror in it.  Prism reflex housings had not been invented yet.  Of course, there was no instant return mirror or automatic diaphragm.   Everything was done proudly, the manual way.  By today's standards, this was a very slow and deliberate system.  Still, many experienced pros of the 1950's preferred this system to those new fangled unproven 35mm SLRs!

This particular 180 Olympic is post war East German with a red T lens coating and mounted on the post-war Flektoscope reflex mirror housing which essentially converted the Contax rangefinder into a rather awkward single lens reflex.   The Flektoscope could also mount the 300mm f/4 Sonnar or 500mm f/8 Fernbildinse.  You can recognize the post war Olympia by their black barrels.  Two reflex housings were supplied.   The earlier like this has a reversed left to right focusing image.    A later version much rarer version uses a pentaprism and looks  like a larger Visoflex II. 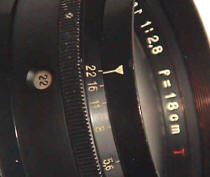 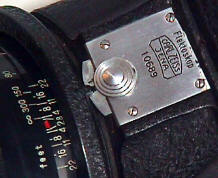 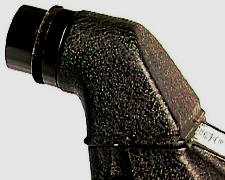 One of the nicest features is the Olympic's amazing light weight.  Weighing in at a petite 3 lbs. 10 oz, the photographer could carry the Olympic for hours barely aware that it was pulling them down to the level of the invertebrates, since most photogs start hallucinating under the weight after about 45 minutes.    The rumor that the Zeiss designers responsible for this monster also designed optical systems on German Battleships is unsubstantiated at this time.   (Considering the immense optical rangefinders for gun control, this might not be as far off as you think.)

Different Olympia Versions: To simplify a very complicated story, Zeiss was split up after W.W.II into the American Zone Zeiss and Russian Zone Zeiss.  Of course they had to battle in court to decide which side could   use the immortal name of Zeiss.    BEFORE the war Zeiss lenses were always engraved "Zeiss Jena."   After the war, Jena was in Russian hands.  The American Zone Zeiss in Stuttgart used the terms of "Carl Zeiss," "Carl Zeiss Opton," and eventually just "Zeiss."    The East German Zeiss continued to use the term "Carl Zeiss Jena" for some time.    For a much better told story with much more detail, read the Zeiss Compendium by Charlie Barringer and Marc Small.

Now the confusing part.     West German Zeiss cataloged some East German lenses for West German Contax!  These included less expensive 50/2 Sonnars, but also the 180 Olympia.  You see, after the war, all the West German longer than 135 Contax RF lenses -- the 180, 300, and 500 -- were  East German !!  And yes, that includes the mirror reflex housing!!

ANY 180 Olympia for the Contax rangefinder is extremely rare.

The Zeiss Compendium estimates TOTAL production at only 700-800 lenses of the Contax Rangefinder reflex housing version, counting  both pre and post war versions!!

Revised: September 13, 2017 .  Copyright © 1998-2002  Stephen Gandy. All rights reserved.    This means you may NOT copy and re-use the text or the pictures in ANY other internet or printed publication of ANY kind.  Information in this document is subject to change without notice.  Other products and companies referred to herein are trademarks or registered trademarks of their respective companies or mark holders.