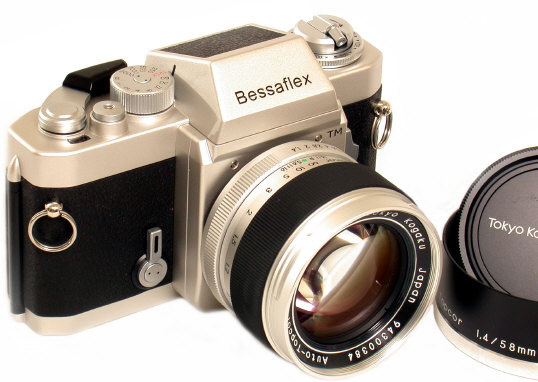 December 2003: Ok folks, some things are stranger than fiction. Mr. Kobayashi likes his Topcon Super D of 1963 enough to style the new silver Bessaflex after it, even producing a Topcon style 58/1.4 complete with the Topcon engraving.   Mr. Kobayashi received the blessings of Tokyo Optical, which is still in business manufacturing medical equipment.

The new 58/1.4 Topcor is a new optical design and is styled after the classic 58/1.4 Topcor, even down to the Topcor's bayonet on lens hood.   These are limited edition lenses, with 800 each announced to be produced in Pentax 42mm screw mount and Nikon AI mount.   The lens barrel is out of place in today's plastic lens world, with real classic style chrome, looking just like it came off Topcon's production line in the 1960's.  The lens barrel is beautifully made, and rather amazing in the "find any way to make it cheaper" manufacturing times.   Side by side the new Topcor is a bit smaller than the original, so the hoods will not interchange.  Specs: 7 elements in 6 groups, multi-coated, f/1.4 to f/16, 9 aperture leaves, 58mm filter size, close focus to .45 meter or 1:5.8, weight 305 grams (Nikon).   The 58/1.4 is discontinued and sold out after one production run after earning in Japan a sterling and near legendary reputation.   Black Bessaflex discontinued September 2006.  Silver Bessaflex discontinued March 2007. 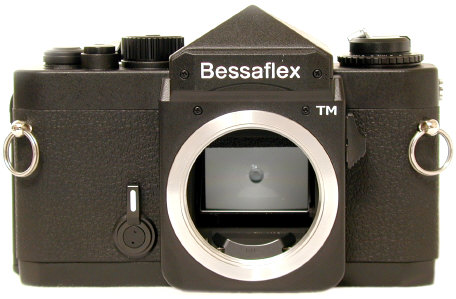 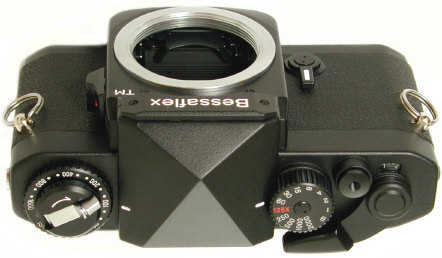 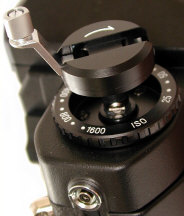 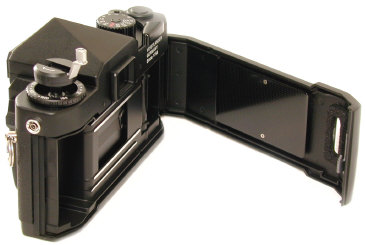 Lens Compatibility:  Not all 42mm screw mount cameras and lenses are compatible with each other, primarily due to metering lugs on some lenses which interfere with lens mounting on some 42mm screw mount bodies.  For instance, the excellent multicoated Fujinon screw mount lenses will not mount on some 42mm bodies unless the metering lug is ground off.  I was happy to find that both the screw mount Fujinon and the Pentax Super-Multi-Coated Takumars mount and function perfectly on the Bessaflex TM.   Due to the thick body depth, 42mm Screw mount lenses are blessed with are more lens adapters available for them to mount on other mount SLRs than any other SLR lens.  Many classic adapters are listed here.  Many modern adapters are listed here.

Stop Down Metering? What's that?  Before many camera makers linked their lenses to the meters in the camera body,  "Stop down metering" was standard for many SLR makers ( most notably for Pentax Spotmatic screw mount bodies.)   This means the lens was stopped down to the shooting aperture to meter the light coming thru the lens at that aperture.   Unfortunately as the f/stop gets smaller the finder gets darker -- impeding both focusing and viewing.  "Open Aperture Metering" makes the meter calculations with the lens wide open for easier viewing and focusing by using mechanical or electronic meter linkage between the camera and lens.   Thousands of different makes of 42mm screw mount lenses were made over the years.  Comparatively few 42mm screw mount lenses used some type of open aperture metering.  The only way to make the Bessaflex TM meter compatible with ALL 42mm lenses is to use stop down metering. 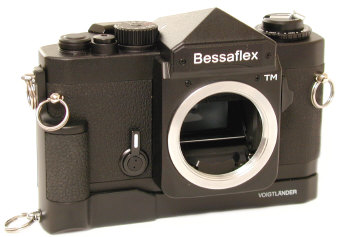 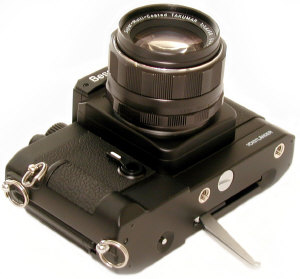 The same Bessa Trigger Winder for the Bessa R2, R2S, R2C, and Bessa T also fits the Bessaflex.  Mounted is the superb and hard to find Pentax Super-Multi-Coated Takumar 85/1.8. 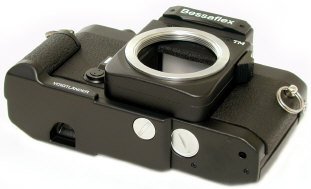 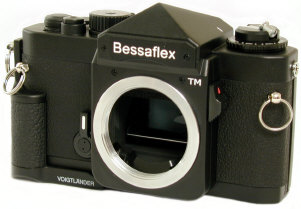 The same Bessa Grips  which fit the Bessa R2, R2S, R2C, T and L  also fit the Bessaflex.  The side grip shown here also protects the bottom of the camera -- besides providing a better grip.

How does the Bessaflex compare to classic 42mm screw mount SLRs?  Feature for feature, I think the super bright finder, optional bottom trigger winder, and back door film window are probably unique -- and possibly the mirror up self timer as well.  Others features like a top speed of 1/2000th, flash sync of 1/125th, Silicon meter cell, and LEDs in the finder are unusual in screw mount SLRs, but not unheard of.   While the classic Pentax Spotmatics have a better fit and finish, some shooters may find the overall balance of features in the Bessaflex a better shooting combination.   If you are looking to find a good shooting SLR for your closet full of 42mm screw mount lenses, the Bessaflex merits serious consideration. 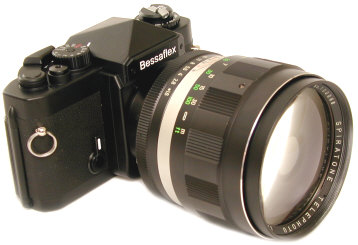 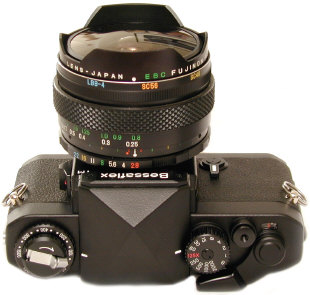 The Bessaflex can mount literally thousands of 42mm screw mount lenses.  Some are quite unusual.  Shown mounted on the left is the Spiratone 135/1.8.  On the right is the Fujinon 16/2.8 full frame fisheye. 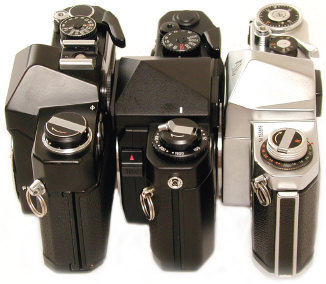 Trivia: the 42mm screw SLR lens mount was first introduced on the East German Zeiss Contax SLR of 1949, the first production 35mm SLR with a built in eye level pentaprism.  Some believe its production came about a decade later than originally planned, interrupted by WWII.  The lens mount was popularized by the Asahi Pentax, which started production in 1957.  "Pentax" was originally a camera model in the Asahi lineup before it became the name of the company.    Even the "Pentax" name was originally a Zeiss Ikon VEB trademark until bought by Asahi.  It was originally derived from "PENTaprism" and "contAX."

The Hmm Dept:  I wonder if the TM for Thread Mount might imply Mr. Kobayashi has plans for other classic lens mounts for the Bessaflex.   Time will tell.   Hmm.

Revised: September 11, 2017 .  Copyright © 2004-13 Stephen Gandy. All rights reserved.    This means you may NOT copy and re-use the text or the pictures in ANY other internet or printed publication of ANY kind.  Information in this document is subject to change without notice.  Other products and companies referred to herein are trademarks or registered trademarks of their respective companies or mark holders.